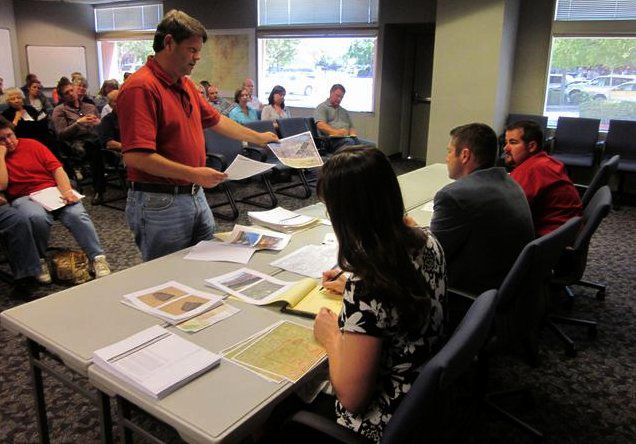 For the speakers at the May 2 Pahnamid scoping meeting, the issue boiled down to zoning.

The developer wants the county to overlay WE (Wind Energy) zoning on 7,106 acres, a desgination that would allow the construction of industrial wind turbines.

The Rev. Gregory Dick of St. Michael's Abbey in Silverado, Calif., spoke on behalf of the order's Norbertine Sisters, whose monastery is in Water Canyon.

Father Dick said one of the alternative accesses to the development is on an easement that cuts through the monastery property. He referenced the original zoning when the order purchased the property 11 years ago.

“That's why we have zoning, to look out for the common good,” Father Dick said. “That's why we bought this property. If I had a choice, we would move the whole monastery here. But you wouldn't want it — it's too big.”

The monastery began in 2000 with six nuns. Twenty-two nuns live a contemplative life there now.

When you buy land, you expect the zoning to remain the same as when it was purchased, he said.

Going to get ugly

“It's the shortest setback in the nation,” she said.

“This is the only project I have serious problems with,” said McQuillen, who has negotiated wind project leases for many property owners but refuses to write leases for the Pahnamid project.

She said the transmission lines, the location of which are not identified on the NOP, mayt create potential health effects.

“This is just the wrong project,” she said.

Almost every speaker offered a unique perspective, adding to the list of issues the county is obliged to include in the project’s Environmental Impact Report.

“The city is very concerned about this project,” said city of Tehachapi Community Development Director David James. “It has quality of life ramifications that are difficult to fold into the CEQA (California Environmental Quality Act) process.”

James said the project encroaches much farther (west) than ever anticipated, and asked that the project “not be allowed to get ahead of itself in cutting temporary roads that might not come to fruition.”

Mike MacKenzie, the only speaker to express support for the project, said that a housing development on the site would produce more light pollution than turbines.

He disputed the belief that disturbing the soil would spread Valley Fever (“People spread disease, not wind turbines.”)

MacKenzie said that turbines do not make much noise (“There is more noise when wind goes through a tree than through a wind turbine.”).

Janice Hagen-Armstrong of Smart Growth Tehachapi Valleys said the plan “breaks the original rule (of the Tehachapi Wind Resource Area) from the '80s.”

She said that Mountain Valley Airport (gliderport) has had a 33-year contract with the Air Force for test pilot training and that 137  turbines 500 feet in height would compromise flight safety.

A representative of the Audubon Society said the turbines would cause avian fatalities.

A representative of Friends of the Oaks said the project would create “tremendous habitat loss.”

Former Tehachapi mayor John Rombouts expressed concern about wildlife, the visual impact and access roads. He questioned why certain interior portions of the property were excluded from the project, suggesting they were carved out for the property owners.

“If this mountain is going to be disturbed, with rain and snowfall we're going to see a change in runoff and conditions that are going to be deplorable,” Williford said.

“It makes no sense,” said Bob Moran of Old West Ranch. “It throws common sense out the window.”

Calling the turbines, “big metallic dinosaurs,” he said they are, at best, 23 percent productive and provide no energy locally, “not one single watt.”

He said the project, with taxpayers reimbursing the wind companies, would “bring in a huge industrial complex on top of the gorgeous mountains.”

The machines make noise and vibrate, he said.

“I can feel the vibration coming through,” he said. “It flows right through the ground.”

Many investors, he said, “never come to the United States. They never see the wind turbines we have to suffer with. It's the wrong place. Keep it on the other side of Willow Springs Road. Do not rezone this.”

“The sound intensifies,” said Donna Moran. “It doesn't travel in a straight line.”

Other speakers said that the project would depress property values.

Buzz Grantham asked how fire-retardant-dropping helicopters could put out a fire when they have to contend with 500-foot high turbines.

“This could be a catastrophe of unknown proportions,” Grantham said.

The mountain, he said, “is the hallmark of Tehachapi.”

“This mountain has character,” said businessman Rod Wolcott, who lost his home in the July, 2010 Old West Ranch Fire.

Wolcott expressed dismay over the turbines' flickering lights and the potential destruction of Native American artifacts. He showed the planners a flint-knapped stone implement he found on his property.

He said he looked “everywhere” to find his land, and “now my retirement property can be deemed worthless.”

“This is very emotional for me,” said Laurie King of Mountain Meadows, who attended the meeting with her husband Tom and home-schooled sons Daniel, 16, and Payden, 13. “We designed our house to face the mountain. They want to put three windmills directly across from us.”

“I didn't think in my lifetime I would see this,” said Don Dyas, who has owned large parcels on Double Mountain for 44 years.  His property is adjacent to the development site.

On his land, he said, “The stars are so bright they almost blind you.”

Dyas said the protected California condors that he sees on his property “are the clumsiest birds; they will be flying into the windmills.”

He said the gradient on the mountain is 60 to 70 percent, and bulldozers grading the project would send boulders rolling downhill.

“I've seen trees shaking a half mile away,” he said.

People are concerned, he said.

“The county might as well be trying to sell snake oil. I never thought it would get to this stage.”

“This is just wrong,” said lifelong Tehachapi resident Socorro Schmidt, who is working to secure Scenic Highway designation for a stretch of Hwy. 58 west of Tehachapi. “This degrades the area rather than builds it up.” She said economic benefits from tourism might be unable to recover.

The night sky, she said, “would become a dull red glow.”

Schmidt said that increased human activity in the mountains would increase chances of fire.

As it is, “There is little human activity  in our mountains.”

“How many birds and animals must we sacrifice?” Schmidt said. “How many trees? How many acres?”

Schmidt closed with, “This project comes at too heavy a price for a paltry return.”

“This is serious for us,” said Trace Robey. “This is where we live. Our lives are disrupted so other people can put a whole bunch of money in their pocket. You may see some litigation.”

Penny Melko from Sand Canyon said the project is “inhumane” and asked for a full moratorium.

“We have to stop. We've got to stop it here in Kern County.”

Of the 50 people who showed up at the Pahnamid Wind Energy Project scoping meeting, Monday, May 2, in Bakersfield, 23 expressed opposition and one offered an alternative point of view.

Three of the principals involved in the project — Steve Yatsko, project manager for Terra-Gen, and Ted Wyman and John Eckert, who own land where the proposed project would be sited — were in attendance but did not speak.

Public speakers included Don Dyas, a landowner in the mountains, who said he would not lease to Terra-Gen; Norbertine priest Father Gregory Dick, who spoke for the order's Sisters who live in Water Canyon, and Tehachapi Community Development Director David James, who expressed the city's concerns about the project.

Public speaker Mike MacKenzie suggested that a housing development on the property would be  more invasive than wind turbines. He said the property  might be transformed into a national park, which would be costly for taxpayers and involve the loss of property tax revenue.

There are advantages to having a wind farm here, MacKenzie said.

“At least think about the alternatives.”

The purpose of the scoping meeting was to find out what issues that agencies and the public want to see studied in the project's Environmental Impact Report. It offered the public their first opportunity to address directly planners from the Kern County Planning and Community Development Department who are working on the project, which would place industrial wind turbines and accompanying transmission infrastructure on the mountains south of Tehachapi.

Community Development Division Chief Craig Murphy conducted the meeting, which ended at 4 p.m. Other county staff listening intently and making notes were Supervising Planner Christopher Mynk and Planner Jacqui Kitchen. The meeting was held in a conference room at the Public Services Building at 2700 M St.

The planners were there to listen. Murphy responded only to keep the session focused.

Following Murphy's explanation of the NOP and EIR process, the first order of business was to open comments on an EIR for the High Desert Solar project by Element Power. Dave Russell, contract engineer for the Mojave Air and Space Port, said glare and solar panels as habitats for birds were their main concerns.

The solar hearing closed at 1:50 p.m. and the Pahnamid hearing opened with Murphy's brief description of the project.

The Pahnamid project, he said, would generate 411 megawatts from 137 turbines on a 7,106-acre site. Terra-Gen's Alta Windpower Development is asking that 4,820 acres be zoned Wind Energy (WE) and is requesting Conditional Use Permits for temporary concrete batch plants.