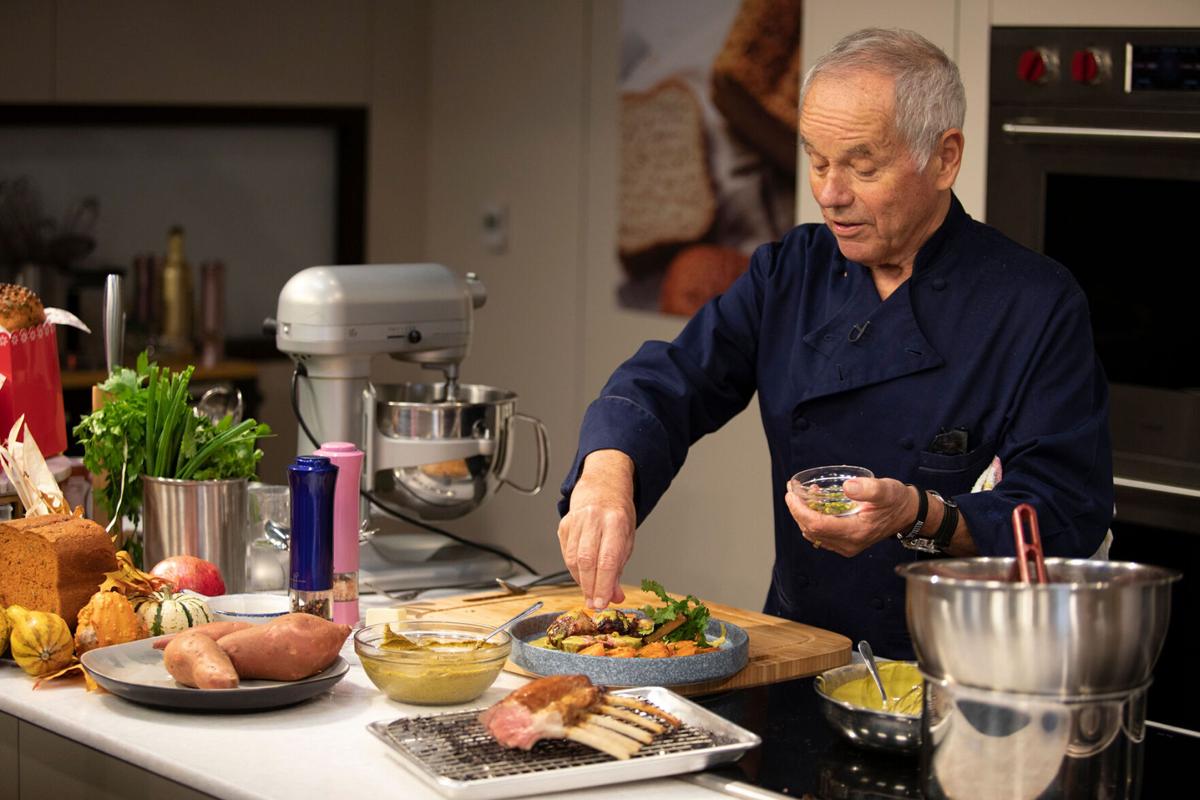 Celebrity chef Wolfgang Puck prepares roasted rack of lamb using his recipe for pistachio butter. It incorporates California-grown pistachios, which are expected to have a record crop in 2020. 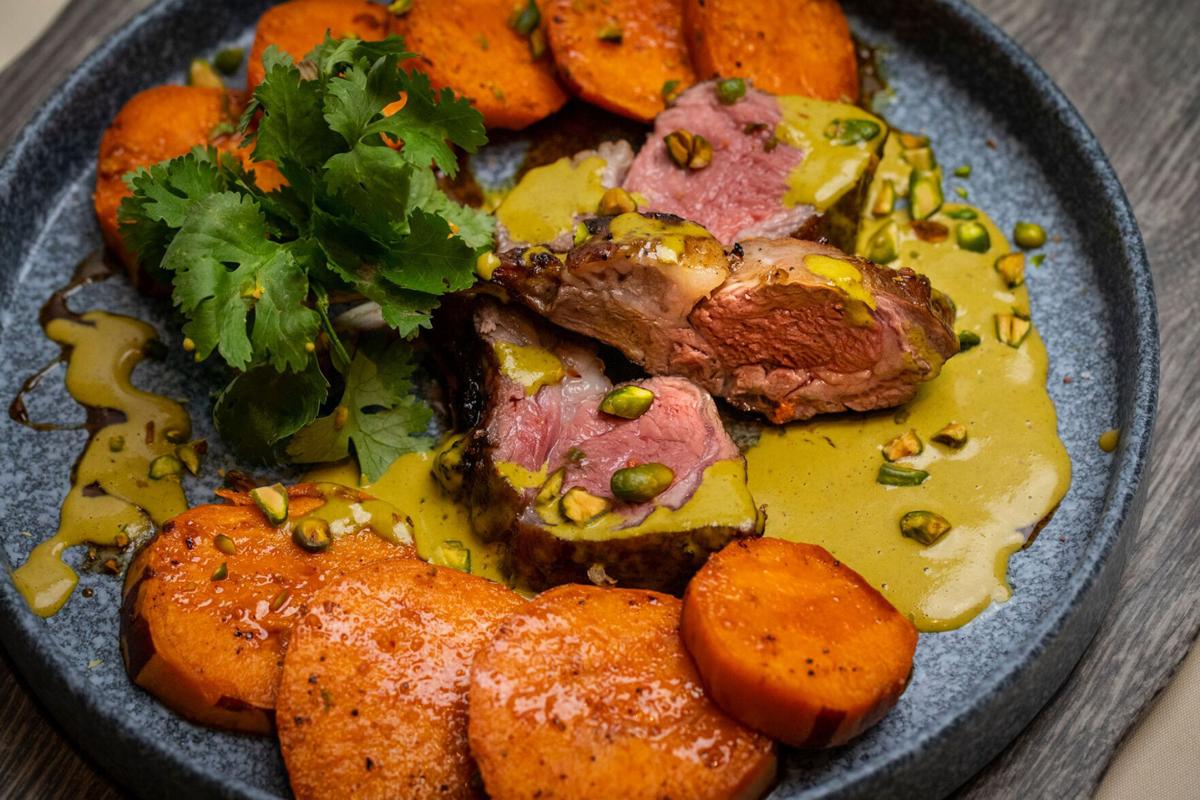 Celebrity chef Wolfgang Puck made this roasted rack of lamb using his recipe for pistachio butter. It incorporates California-grown pistachios, which are expected to have a record crop in 2020.

Celebrity chef Wolfgang Puck prepares roasted rack of lamb using his recipe for pistachio butter. It incorporates California-grown pistachios, which are expected to have a record crop in 2020.

Celebrity chef Wolfgang Puck made this roasted rack of lamb using his recipe for pistachio butter. It incorporates California-grown pistachios, which are expected to have a record crop in 2020.

One of Kern's favorite agricultural investments is undergoing a makeover of sorts in time for what's expected to be a record crop of 1 billion pounds.

California's pistachio industry has launched campaigns promoting the nut as not just a tasty snack but also a super-nutritious protein just as suitable in entrees as sprinkled over a cupcake or mixed into ice cream.

The latest example of this push is a series of culinary webinars by celebrity chefs. Their online cooking demonstrations, including one this week by Los Angeles restaurateur Wolfgang Puck, are aimed at increasing consumption in foreign and domestic markets.

"We haven't promoted them as a culinary nut because of supply. Well, here's supply," said Judy Hirigoyen, vice president of Global Marketing at the American Pistachio Group trade group.

At stake is the price of an increasingly popular investment that brought Kern farmers almost $887 million in 2019. That year, according to county records, pistachios were the only one of four top-grossing ag commodities that experienced more than a 2 percent, year-over-year increase in local acreage.

The pistachio industry is expecting this year's crop to surpass 2018's record of 994 million pounds despite questions about weather-related problems that hurt production in some parts of the southern Central Valley.

But the key to pulling off a steady, healthy price in the face of rising production is expected to be an active and sustained marketing campaign that persuades consumers to select pistachios over other nuts and plant proteins.

American Pistachio Growers' efforts to do just that involve repositioning the nut from luxury snack to broadly appealing health food, something like the image almonds enjoy as a culinary ingredient.

Hirigoyen said now is the opportune time to promote that vision because people are spending more time at home and relying on shelf-stable ingredients.

This strategy benefits from research published earlier this year showing pistachios rank highly among plant proteins. The nut was unique among its peers on the list in that consumers don't have to cook pistachios.

"Frankly, it's a game-changer," Hirigoyen said of the protein-quality research.

While putting together the celebrity-chef webinars, APG learned chefs like pistachios' greenish color and its novelty as an ingredient that hasn't until recently figured prominently in western cuisine even though Persian menus have incorporated the nut for millennia.

During the past five years the nut's image is changing in almost all markets, domestic and global, Hirigoyen said. That's a result, she said, of APG's tight advertising focus on active-lifestyle adults interested in fitness and nutrition.

The trade group has sponsored athletes in a variety of sports, from cycling to water polo. Recently it added a mountain snowboarder who had already turned to pistachios as part of his nutritional program.

Leading local pistachio grower The Wonderful Co. said its own work in the snack-nut category is now expanding to position the product to compete with snacks more generally. Together with messaging about plant-based eating, it recently introduced new flavors of shelled pistachios.

"While pistachios work just as well as a star ingredient or garnish — from smoothies to entrees — snacking has never been bigger in the U.S.," Los Angeles-based Wonderful said in an email.

That said, the company was quick to tout the nut's culinary credentials.

"When incorporating Wonderful Pistachios into recipes, they’re already beautifully green, so they’re a natural choice for pestos and work really well in smoothies, not only for adding plant protein, but because they’re a softer nut that blends more easily," it stated.

It said pistachios can be used in the kitchen to replace croutons to add crunch and plant protein. Or, it said, they can be crushed and used to crust fish, "which keeps the fish tender, adds crunch and is a heart-healthy choice."

As long as it's not just seen as another food decoration, Hirigoyen said she's happy.

"We're not looking for someone making cupcakes to put one pistachio on top and call it a day," she said.

In a feat witnessed Thursday by more than five dozen journalists and social media influencers, the Austrian-born celebrity chef Wolfgang Puck performed something few Westerners had imagined: He used pistachios as an ingredient in a savory dish as well as a sweet one.

His secret? Pistachio butter — or as others called it, pistachio paste, a nutritious standby that can be kept jarred in the refrigerator for use on everything from fish to poultry.

"It's outrageous and it's so crazy easy to make at home," said Judy Hirigoyen, vice president of global marketing for the American Pistachio Growers trade group.

In anticipation of a record U.S. pistachio crop this year, APG says it is mounting a "full-court press" to promote the nut using live, interactive cooking demonstrations featuring well-known chefs.

After Puck's demonstration targeting U.S. and German audiences, chef Nancy Silverton will create dishes geared toward the U.S. and Indian markets. She will be followed by chef Gerald Hirigoyen, engaging with the French, Spanish and U.S. markets, and chef Martin Yan, whose demonstration targets the Chinese and domestic markets.

Transfer butter to a container with a snap-on lid. Refrigerate if holding the butter for more than a few days.