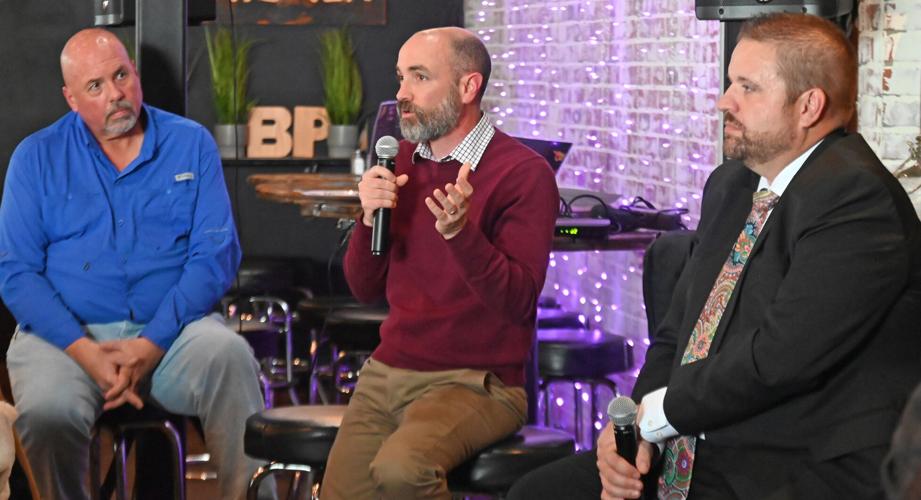 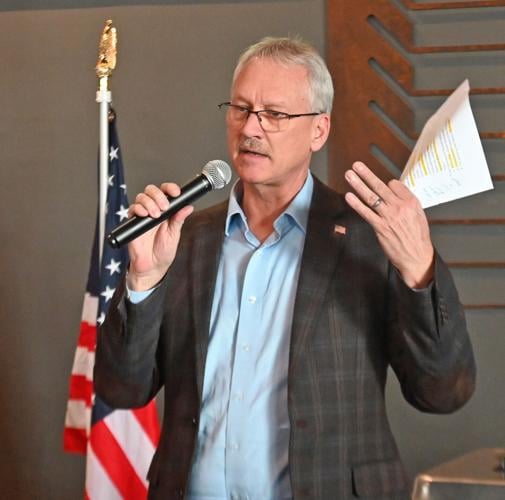 City Manager Greg Garrett was a speaker at the Jan. 17 luncheon meeting of the Greater Tehachapi Chamber of Commerce. 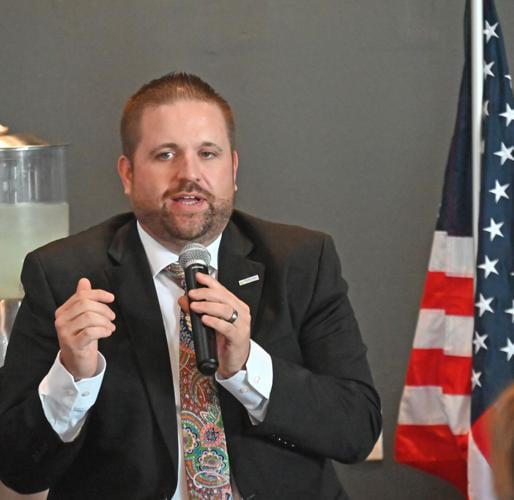 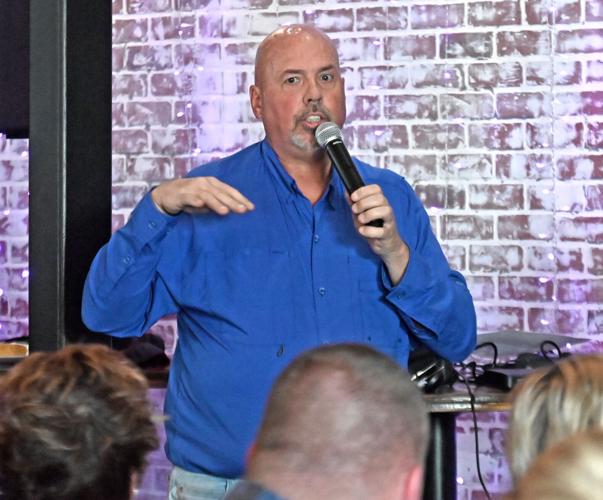 Community Engagement Manager Key Budge joined other city staffers to speak at the Jan. 17 luncheon meeting of the Greater Tehachapi Chamber of Commerce. 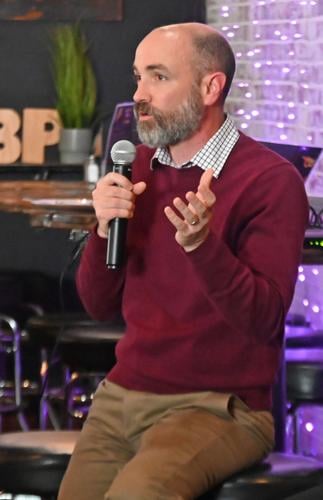 Development Services Director Jay Schlosser talked about water and new housing at the Jan. 17 luncheon meeting of the Greater Tehachapi Chamber of Commerce.

City Manager Greg Garrett was a speaker at the Jan. 17 luncheon meeting of the Greater Tehachapi Chamber of Commerce.

Community Engagement Manager Key Budge joined other city staffers to speak at the Jan. 17 luncheon meeting of the Greater Tehachapi Chamber of Commerce.

Development Services Director Jay Schlosser talked about water and new housing at the Jan. 17 luncheon meeting of the Greater Tehachapi Chamber of Commerce.

It wasn’t officially the “state of the city,” but Tehachapi City Manager Greg Garrett spoke at the Jan. 17 luncheon meeting of the Greater Tehachapi Chamber of Commerce, sharing insights about city operations and its role in the larger community. He was introduced by Chamber President Jeanette Pauer. Joining him were three staff members — Assistant City Manager Corey Costelloe, Development Services Director Jay Schlosser and Community Engagement Manager Key Budge.

Garrett thanked voters for passing Measure S last November. The one-cent sales tax increase will go into effect April 1, providing city coffers with funds it doesn’t have to share with the state of California. The sales tax increase will yield about $1 million for the city in the current fiscal year and about $4 million per year in future years.

Value of the city

Garrett asked those present a question: “What do you think the value of the city of Tehachapi might be? Not the public assets, just private (property),” he asked, then answered immediately.

“It’s about $900 million,” Garrett said, “(we’re) approaching a billion dollar valuation. It was $750 million about two and a half years ago. So we’re gaining in value. We’re building wealth. We’re putting money in your pockets. We want to keep doing that.”

But Tehachapi doesn’t want to grow just to grow, the city manager noted.

Garrett discussed the efforts that the city has made over the past 15 to 20 years to improve the city and create a heart for the entire region.

“We are building — we, all of us in this room and everyone that lives in the city and the surrounding area — we're building an amazing city,” he said, adding that the downtown area once didn’t look as good as it does now.

“And we took notice, and we said we need a plan. Let's make a plan. And we did that. And we started with redevelopment. And now people are coming to invest in our town — with their money, with their businesses, with their small businesses, which is the basis for the United States, right? That's what makes the world go round. We continue to attract amazing people to our community. And everybody's welcome to join our club, too.”

Staff members with Garrett addressed a variety of topics including retail, housing development, water and communications.

Costelloe was named assistant city manager just over a year ago. He has also retained many former responsibilities including acting as the city’s economic development coordinator.

The city has used many tools to help tell its story to businesses considering locating in Tehachapi.

“Everybody's got a cell phone in their pocket, and every one of those cell phones is effectively being tracked by third party apps,” Costelloe said. Tapping into the data has helped the city understand that the true trading area for Tehachapi businesses isn’t just the 40,000 people who live in the region but is actually about 200,000 people who have shopped in town — typically at Walmart.

“We can tell who's visiting Walmart … and where they're coming from,” he said. Shoppers include local residents as well as people from California City, Mojave and Rosamond — and others who might be stopping by on their way to or from Las Vegas.

“Housing is a really tricky issue, very tied to the economy at large,” Schlosser told luncheon attendees. “And it's also increasingly tied to what Sacramento's doing,” he said, pointing to recent changes in state building codes that will require — as an example — all multifamily housing to have electric stoves.

Compared to the outlying unincorporated areas, new home construction within city limits has been limited in recent years, he said.

He acknowledged that building homes in the city may be more expensive.

“The reality is that urban growth is often more expensive than suburban or rural,” he said, noting that development costs include building roads, curb, gutter and sidewalks, streetlights and fire hydrants.

“That's the expectation for housing development here in the city. It's not the same outside of the city. And so that's why you've seen … a disproportionate amount of growth outside the city as in the last few years.”

There are bright spots, though, Schlosser acknowledged. He noted that Khov, a national builder, is building houses again in the Alta Estates subdivision.

“They’re beautiful homes,” he said of the Tehachapi Hills project near Warrior Park.

As professionals consider housing markets, especially in California, Schlosser said there is what’s called the “missing middle.” At one end of the spectrum there is low-income housing and at the other there are market value homes being built in the $500,000 to $600,000 range. At what might be called the “middle of the middle,” he said, are what are now considered starter homes priced at $250,000 or $300,000.

Condominiums or smaller lot development are options for addressing the “missing middle,” he said, noting that the city is a good location for such development.

“So we are seeing some of those (types of projects) go through the process,” Schlosser said.

“I always reserve judgment (about projects),” he said.

“You know, I've seen so many projects come and so many projects go over my 20-year tenure that I try not to make bets anymore, because I just don't know where the economy will even be in six months. But a lot is happening, a lot of new stuff. The city is seeing that full spectrum of housing — maybe that is the message I leave you with. We're seeing some of the condominium level stuff, all the way through large single family homes on larger lots.”

Garrett said the city has a number of projects lined up. Some are largely grant-funded. These include a new park on Valley Boulevard that will be built this coming summer and fall. The city will also be extending Pinon Street west from Dennison Road to Brandon Lane.

Another project in the queue is replacement of the Dennison water main. The Cherry Lane water line replacement project was recently finished and the city also completed a number of paving projects last year. It’s also continuing to work on a planned recycled water pump station.

These projects take planning and budgeting, Garrett noted. Even when grant funds are available the city must sometimes contribute additional funding.

He and Schlosser also addressed the water situation in the city.

“Tehachapi is not under a drought,” Garrett said. “We are very healthy.”

Schlosser referenced John Steinbeck’s 1952 novel, “East of Eden,” and said that the author noted that California has 30-year water cycles where “you get 10 or 15 years of an average amount of water, and then you get six or seven years where you don’t get any water… He was observing what’s happening in the Salinas Valley, (that) as soon as you get four or five or six years of drought, everybody thinks the sky is falling down in California because it’s over, it’s never going to rain. And that cycle, that hydrologic cycle, is true as the day is long. And we’re in that cycle.”

Schlosser also referenced the adjudication of the Tehachapi Basin that took place in the 1960s and said that the city keeps within the groundwater pumping restrictions it put in place.

Community Engagement Manager Key Budge also shared information about how the city works to build relationships by communicating. He manages the city’s social media outreach and other communications including its award-winning podcast, TehachaPod.

In addition to organizing events such as the monthly Coffee With the Mayor, Budge ensures that the city’s story reaches people on its Facebook, Instagram and YouTube channels, in addition to working with media. And most recently, the city has added Text My Gov. (Text “Hi” to 661-441-3844 to get started).

“It’s second nature to text, and it’s easier,” he said.

Through all of its communications platforms, Budge said, the city reaches about 25,000 people — even though only about 10,000 people live within the city.