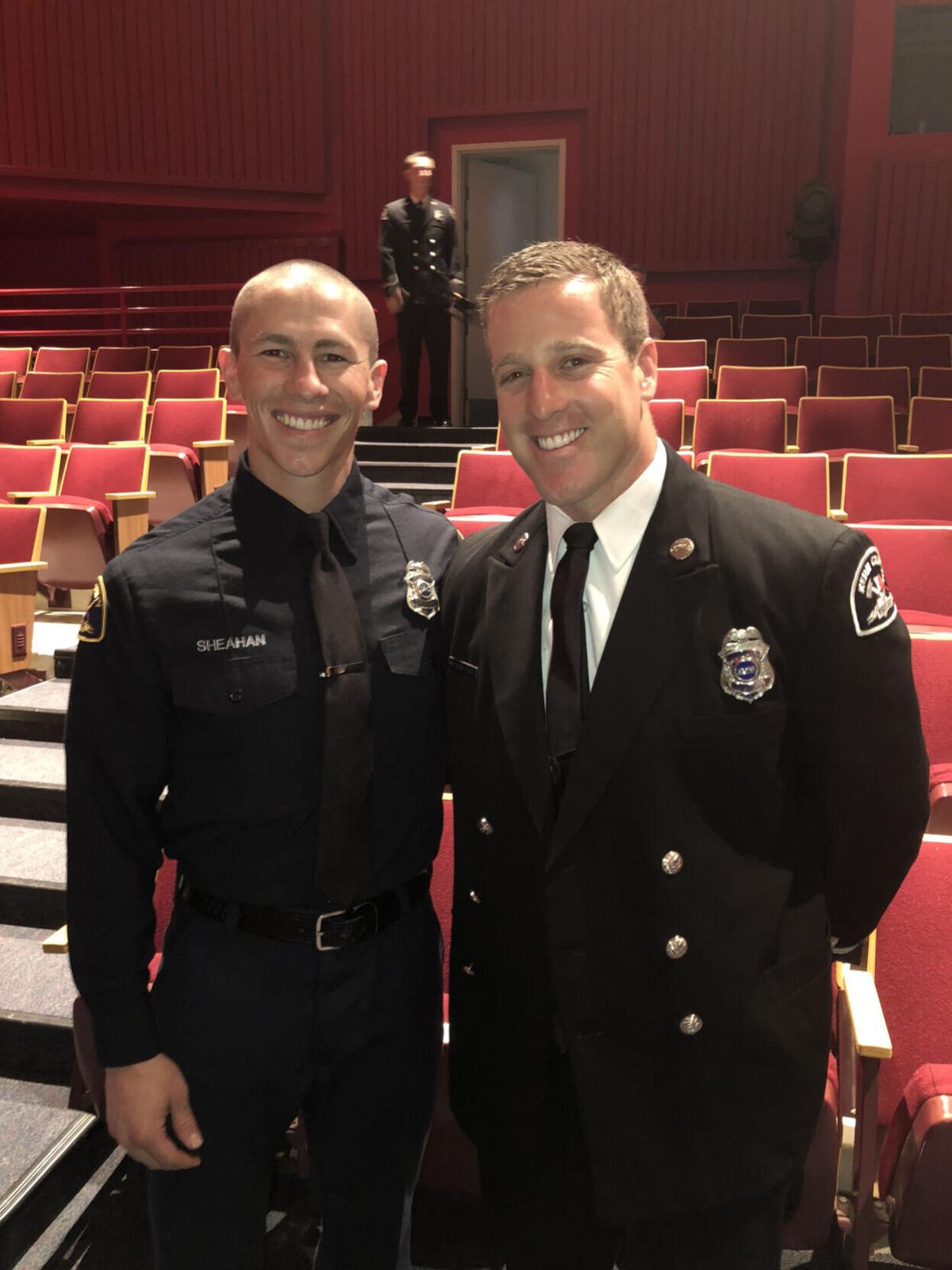 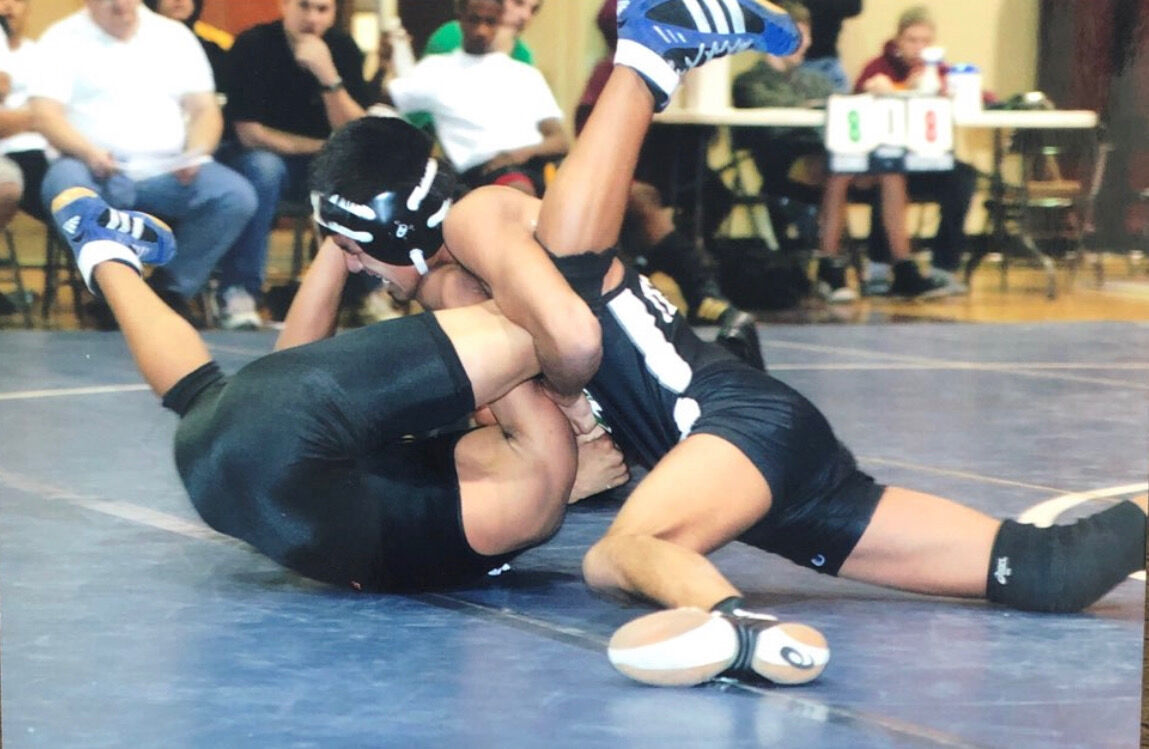 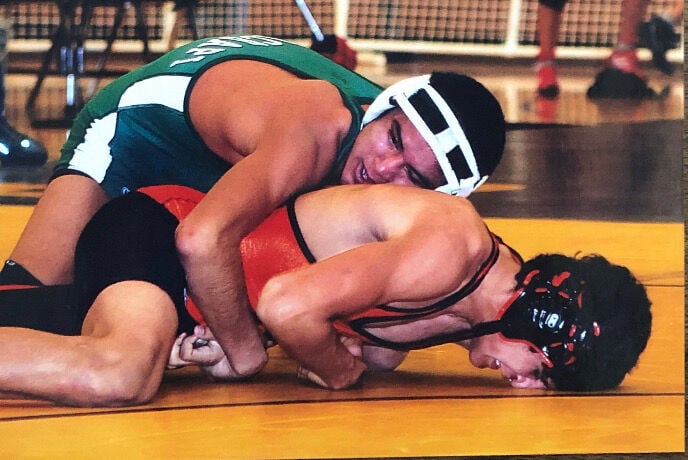 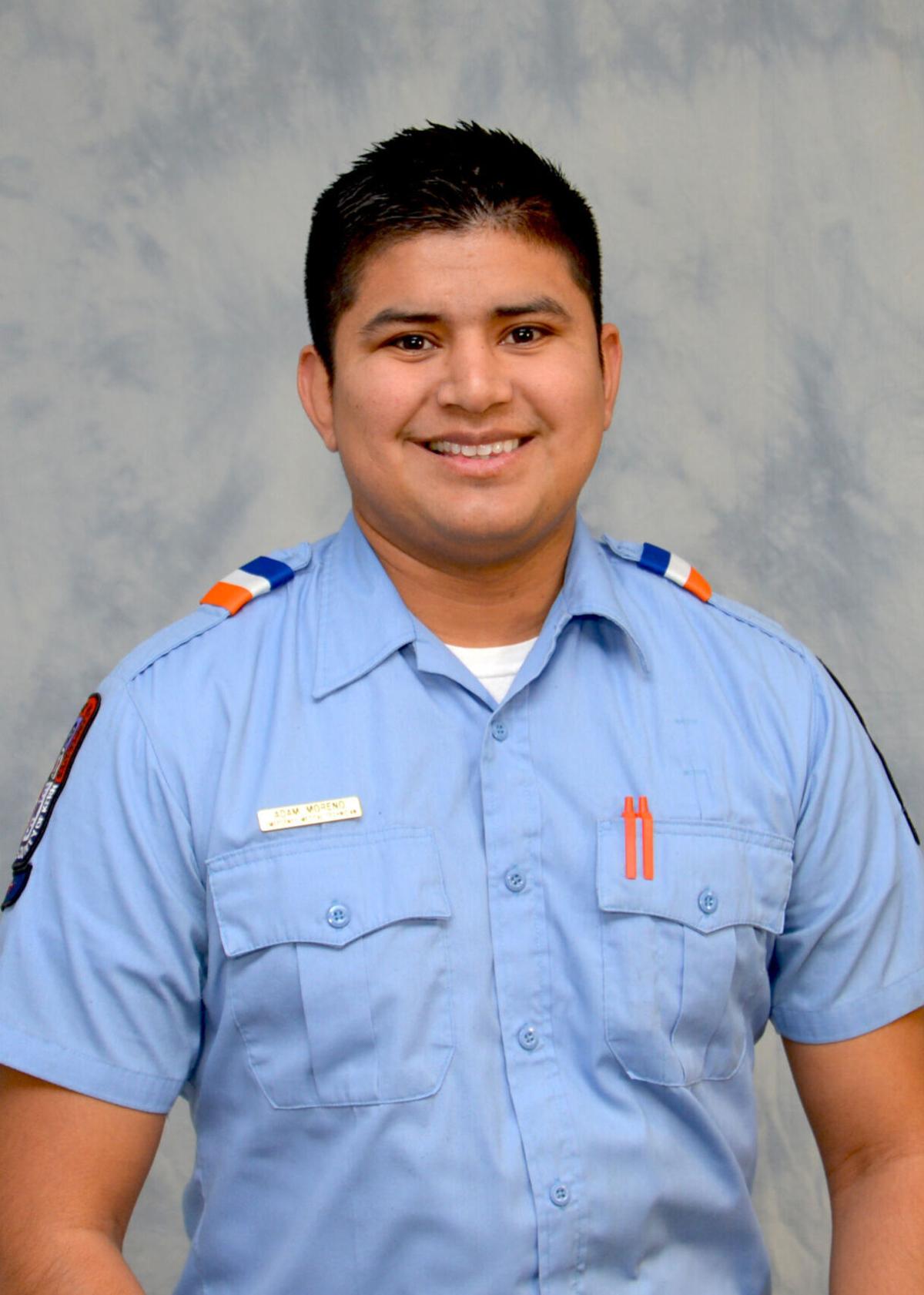 EMT Adam Moreno is a 2009 Tehachapi graduate where he wrestled and competed for the cross country and track and field teams. 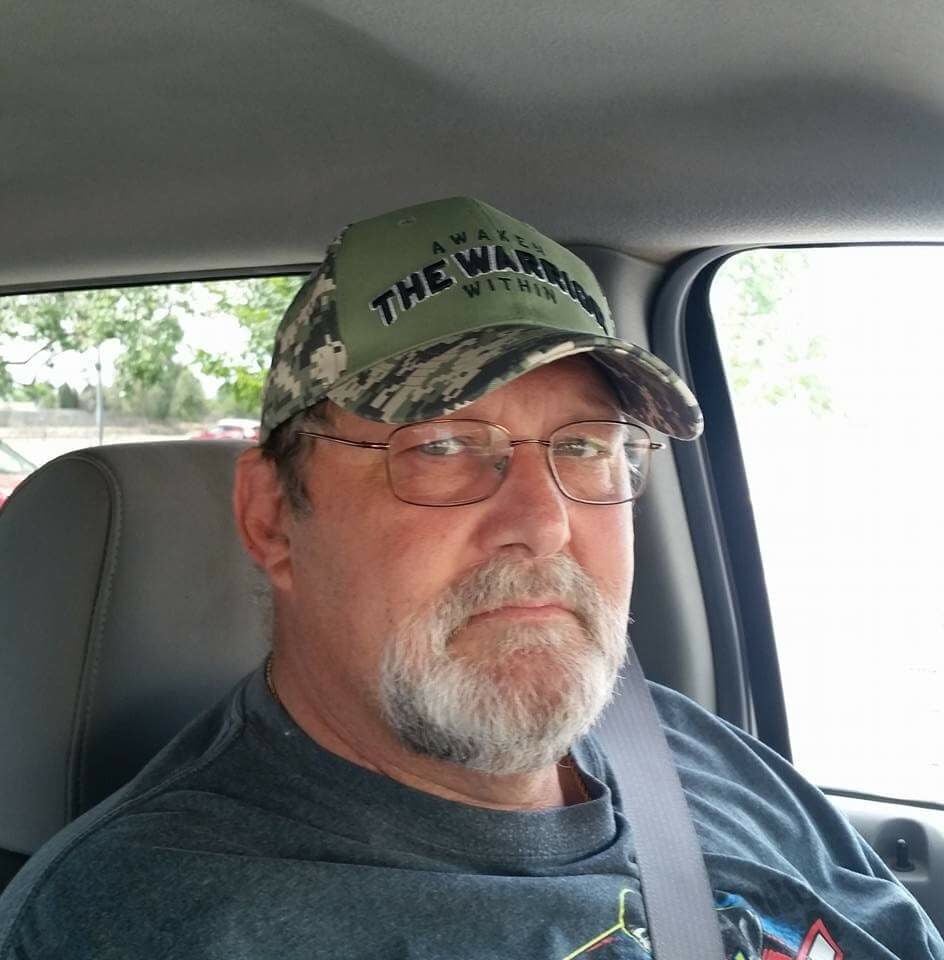 EMT Adam Moreno is a 2009 Tehachapi graduate where he wrestled and competed for the cross country and track and field teams.

As the old saying goes, “the apple doesn’t fall far from the tree.”

That’s especially true in Tehachapi, where the idiom has been set into motion, for at least the past two decades if not longer.

And while there are plenty of orchards of the juicy fruit lining the area's mountain landscape, the tree in question more literally refers to longtime high school wrestling coach Desi Lovenguth, whose impact on his athletes cannot be overstated.

“I’ve never met someone like Coach Desi,” said Adam Moreno, a 2009 Tehachapi High School graduate, who wrestled for Lovenguth for three years and also ran cross country and track and field for the Warriors. “He’s a great coach. He made you want to do your best. You wanted to perform well for him just based on the way he treated you.

“The way that he coached us, he added life lessons to the way that he taught us. That was a big part of it. He was grooming us for life, not just for the sport, I would say. It was Desi’s way of teaching. Not only applying what he taught us on the wrestling mat, but to take that into your everyday life. And we really appreciated that about Coach Desi.”

Moreno is one of several Tehachapi wrestlers whose life was influenced by the 62-year-old Lovenguth, which eventually led to careers as first responders and in public service.

The 30-year-old Moreno is now married and has been working as an EMT the past five years. He and his wife, Ashly, are expecting their first child, a boy, in January.

“I think what it is, when we started all this way back when, what we tried to teach was unity,” said Lovenguth, a Coalinga High graduate who has been part of the Tehachapi wrestling program since 2001. “And you took care of each other. And you were accountable for your own actions. Wrestling is such a different sport. It requires a mindset that is completely different from any other sport. You have to actually break these kids completely down ... and then you can start building them and showing them just how much stronger they are once they reach that point.”

Although Moreno’s best sport in high school was cross country, his time in the Tehachapi wrestling room helped groom him for his career in the medical field.

“What I learned in wrestling really makes you critically think,” said Moreno, who is closing in on his graduation from paramedic school with hopes of someday becoming a physician assistant. “In wrestling, if you make a move and take your shot, and it’s not there, you have to actually think about what’s your next move.

“The back-and-forth is kind of like working in the field. Say you have a sick patient that’s having difficulty breathing, you try to intubate them and you can’t, now what’s your Plan B? What’s your Plan C? What’s your next plan for this patient? Because it doesn’t always go like a textbook or the way that you want it to. In the medical field, it’s not always going to be easy. You may have a patient and he may deteriorate on you for some unknown reasons, so you have to be quick on your feet.”

Moreno is not the only former wrestler to benefit from Lovenguth’s training methods.

Ben Sheahan and Matt Henry, 2008 Tehachapi graduates, took similar paths to become firefighters. But both received guidance from Lovenguth, who introduced the two to the Kern County Fire Department Explorer Program while they were still in high school.

Lovenguth, who spent several years living in a firehouse while his father, Earl, was a fire captain, learned about the KCFD program when his daughter, Amanda, participated in the Explorers several years ago.

Although Amanda didn’t end up working as a firefighter, coach Lovenguth continued his relationship with program leader Tony Garcia. In turn, when Henry showed an interest in that career choice, the coach’s connections were invaluable.

“He was definitely instrumental in us getting hired, and just the way he’d coach and stuff,” said Henry, who has been a full-time firefighter the past eight years. “Obviously wrestling is competitive, but at the end of the day, it was more about trying to make boys into men by not only physically getting us in shape, but the mental aspect of it.”

Henry and Sheahan, both 30 years old, were introduced to each other while still in diapers. Sheahan’s mother used to babysit Henry as a baby, and the friendship has continued to grow ever since. Each was the best man in the other’s wedding.

"I had never really thought about being a firefighter, but once I started with the Explorers and I saw what they do, it interested me,” said Sheahan, who has been married to his wife, Jill, for 10 years and the two share two children.

He has been a full-time firefighter the past few years after several years working in a variety of different capacities. He is currently stationed in Lamont.

“I knew I wanted to do something physical because I like sports and stuff and working hard. I liked that they get to solve a problem and accomplish that task, and then move onto the next one. So that was really intriguing to me,” Sheahan said.

During his latest assignment, Henry was pushed to the limit physically, working 16-hour days that included long treks up hillsides while carrying a 45-pound pack, clearing brush from the fire zone and sleeping on the side of the road.

It's all a part of the job, one that his days at Tehachapi prepared him for.

“Wrestling in itself prepared me for the wildland side of firefighting just because of the physical demands it puts on your body,” said Henry, who has been married to his wife, Jesika, for eight years. “It’s different physically, especially in the beginning when you’re hiking 2 miles up a hill or whatever. But my time at Tehachapi, and in the wrestling program kind of hardened my mind to be able to push through the physical barriers and do what I needed to do.”

Louis James, a 2007 Tehachapi graduate, is another member of the Tehachapi wrestling tree — who also happened to be a groomsman in Sheahan’s wedding. Sheahan did the same when James tied the knot.

James, who wrestled and also starred on the Warriors football team, took a different route as a first responder, opting instead to go with law enforcement as a career.

He has been working for the Bakersfield Police Department the past seven years and is currently a senior officer in the special enforcement unit, where he feels his training on the gridiron and mat has served him well on more than a few occasions.

“I think there’s also some toughness aspect of it (that I learned playing sports in high school), especially when it comes to a bad physical altercation on the street,” James said. “I think my wrestling abilities have helped out a lot. Some of them are just natural, like a double or single-leg takedown when going straight into trying to get somebody into handcuffs versus being in an elongated fight for several minutes.

“I learned to be a little more social by being on these teams. I talk to people every single day, and it helps that I wasn’t this super-quiet guy in high school. Being able to communicate with people is extremely important in my job.”

Although still a teenager, Zayne Salcido already has a pretty good idea about what he wants to do in the future.

While still competing as a wrestler and swimmer for the Warriors, Salcido was already training to be an EMT. Prior to graduating in 2019, the 19-year-old completed his certification and recently started as a nursing assistant in Tehachapi, primarily taking vitals for patients. It’s all preparation for what he hopes will be a career as a firefighter, following in the footsteps of his father, Mark, a Kern County fireman.

“I really do enjoy helping people, as cliche as it sounds,” Salcido said. “From the beginning, just being a lifeguard, working at the hospital and in the back of the ambulance, and then ultimately being a firefighter I’ll get to help people. Doing all those things makes me feel like a nice person, obviously, and I get enjoyment out of helping others.”

Already being showcased in his home, Salcido’s career goals were enhanced by his training with Lovenguth.

“He just prepared me mentally for the struggles that might come in not only my journey to become a firefighter, but life, too,” Salcido said. “He improved my mental strength tremendously.”

Much like Salcido, Lovenguth was hoping to become a firefighter after high school graduation. But he wound up working several years as a corrections officer, before helping build the foundation for the Tehachapi wrestling program.

He started as an assistant to Tony Keller, but when he took a position in Washington, Lovenguth took over the program in 2008, where he has continued his old-school approach, something he says he couldn't accomplish without assistant Benny Esquivel.

"Benny is our technician and does an amazing job," Lovenguth said. "I work their minds and he works their body. His value has no bounds. He is amazing and everything he does is appreciated."

Together the two work together to mentor their athletes, with hopes of building their character along the way.

“We still teach things the old way, and we might only reach a handful, but ... I don’t even take my team picture until the end of the year,” Lovenguth said. “I want the kids to earn everything that they get. When you learn to take that route and earn things, it’s so much better. I’m still a firm believer that not everybody gets a trophy. You want a trophy, try harder.”

While that approach might seem a bit harsh to some, Lovenguth feels it’s hard to argue with the results. He estimated out of the 250 wrestlers he's coached, 12 became first responders, four are CHP officers and 10 joined the military.

“You can’t teach heart,” Lovenguth said. “Heart comes from within. But what I’ve learned through the years is, I can’t teach it, but I can show you where to find it. What you decide to do with it, is up to you. To me, that’s what I think it’s all about. That unity that we teach is what gives them the ability to go help someone else.

“It’s just nice when you watch them grow up and you watch them go out into the world and become somebody. And you kind of think, ‘Wow, I had a little part in that.’ And I still keep track of all these kids. I have probably 1,200 phone numbers in my phone for every parent and kid that I’ve ever come in contact with. It’s really kind of a cool thing the way we teach respect. We teach honor. We teach all these things and it’s great to see that they go out and apply it in their daily world.”