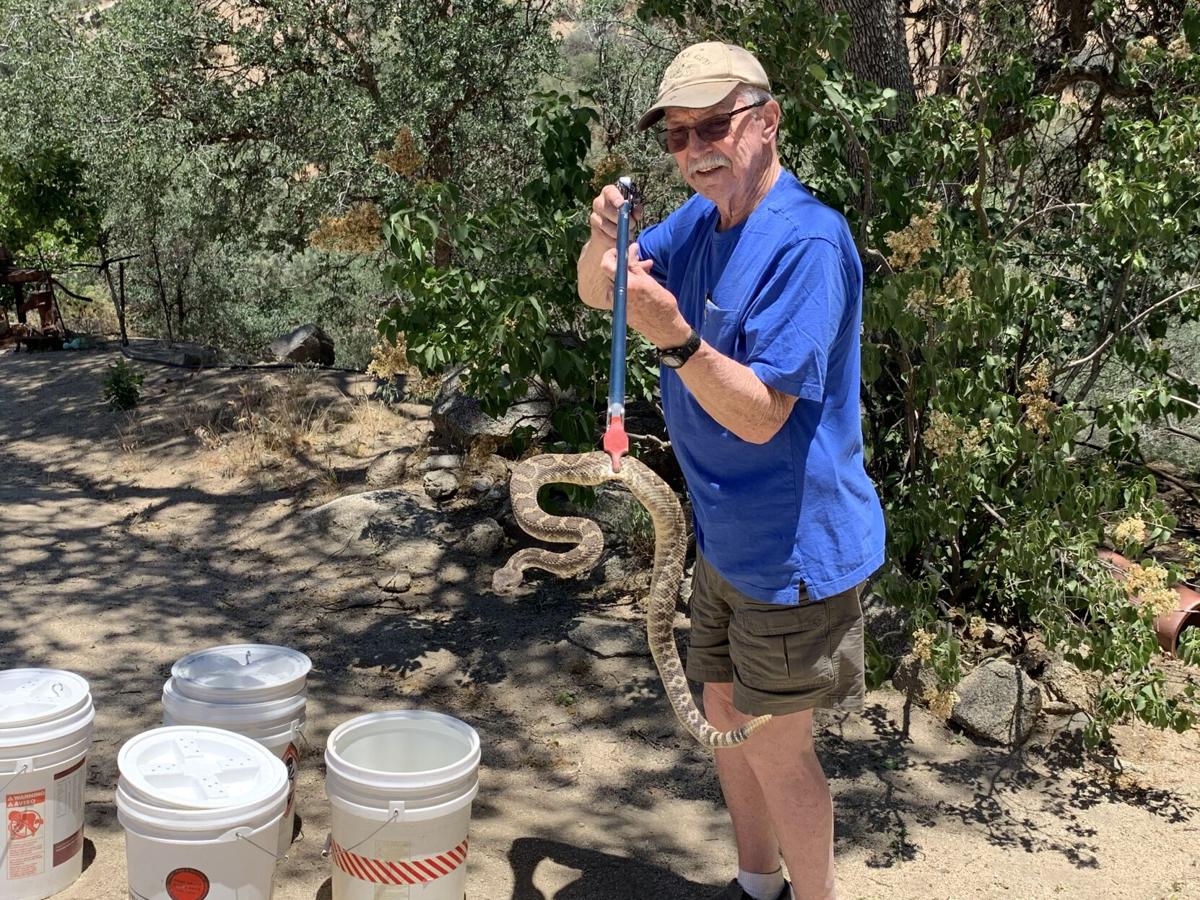 Ron Hayton of the Snake Guys picked up this rattler this year. 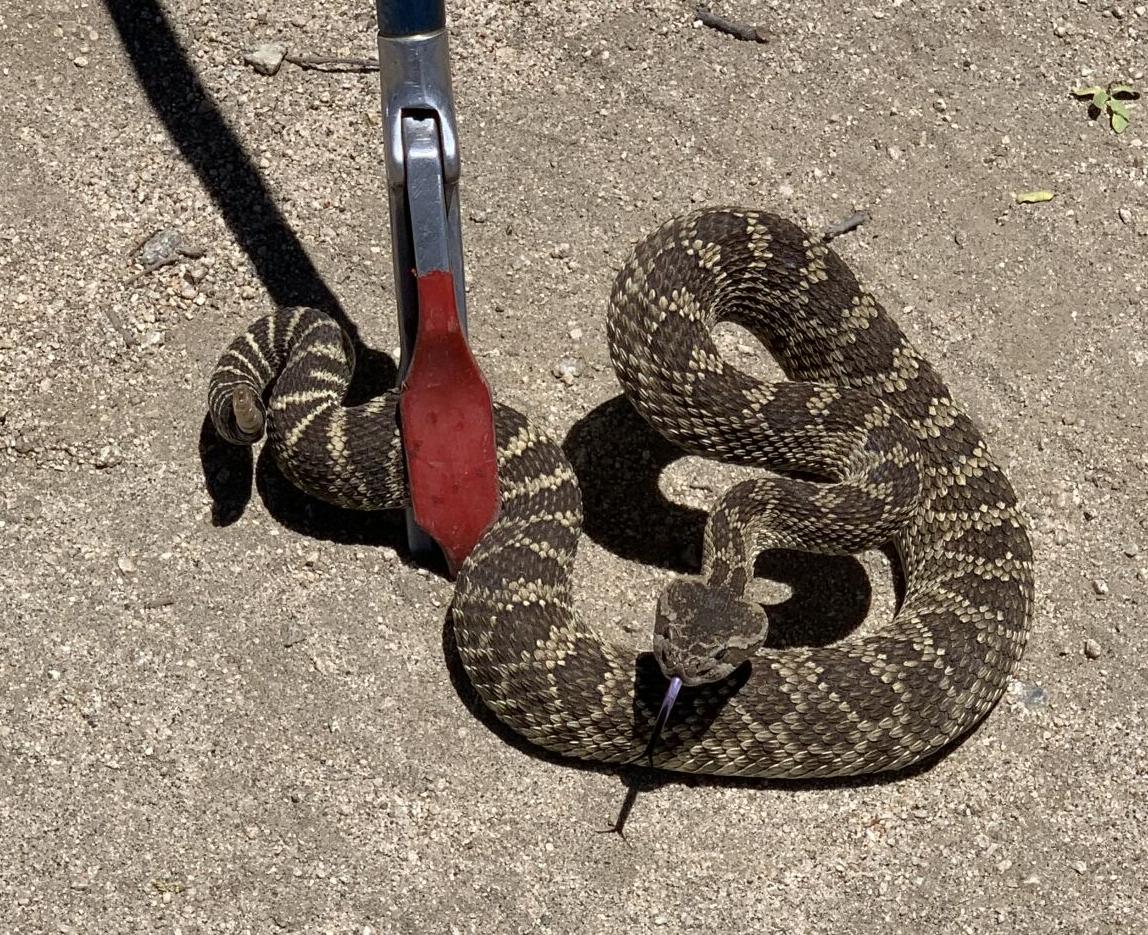 This Northern Pacific Rattlesnake was recently captured and relocated by the Snake Guys.

Ron Hayton of the Snake Guys picked up this rattler this year.

This Northern Pacific Rattlesnake was recently captured and relocated by the Snake Guys.

As spring rolls around each year and the weather begins to warm, Tehachapi mountain residents have to keep a watchful eye out for reptiles waking up and traversing their property and at times, their homes.

For the past 32 years, Ron Hayton has been wrangling snakes, in particular the Northern Pacific Rattlesnake, for as long as he has lived in Bear Valley Springs. He has been handling rattlesnakes since he was 4 years old.

"The rule of thumb is that if you see lizards out, you will see snakes," Hayton said. "I really, really respect them."

Typically, the rush for snake calls taper off after September; however, Hayton said he once had a call on Christmas Eve.

Each year, Hayton said, he drives approximately 20,000 miles on snake calls and their relocation after they are captured.

As of last week, the Snake Guys have captured and relocated more than 90 snakes so far this season, which is exceptional for this time of year.

The most Hayton said the Snake Guys have caught in a single year is 711.

By day, Key Budge works as the community engagement specialist for the city of Tehachapi. But, in his off hours, he is spending much more of his free time rounding up the slithering reptiles.

"I enjoy being a part of The Snake Guys because this is a call for service. Being retired from public safety, I like helping people who are in a stressful situation. Plus, it's a fun date night with my wife (Christine Budge) as we partner up on these calls now," Budge said.

Christine said her first experience with the Snake Guys came about when she joined her husband one day on a snake call.

"I went initially with the intention of being the first to dial 911 in case he got bit by a rattlesnake," Christine said.

Once she became more comfortable with rounding up snakes, she relaxed about the calls.

"It became a way for us to spend time together. We jokingly call it our 'date night.' Now, I’m a full-blown member of the snake guy team," Christine said.

To date, she and Debbie Swarens are the only two snake gals ladies who handle calls. Debbie's husband, Craig, is also a member of the Snake Guys.

So, why, you might ask, does she put herself in harm's way and make a hobby out of snake wrangling?

"We do this because we love helping people. There is a certain feeling of satisfaction that comes when you catch a rattlesnake and are able to put a family’s mind at ease," Christine said.

Asked what her scariest snake call to date was, Christine said, "I was at a home in BVS where a mom with two little children ages 6 and 7 heard that sound that only a rattlesnake makes, close to where the children play in the backyard. She wasn’t exactly sure where the snake was. When I got to the backyard, I saw the snake underbrush on the hillside coiled up."

Knowing it wasn't going to be easy grabbing the snake on the hill with vegetation, Christine said her heart began to pound.

"The children would not be able to play outside and could be in danger if I didn’t grab this rattler. I wasn’t afraid of the snake, but terrified of not catching it. The snake put up a fight and ended up being the biggest, meanest rattler we have caught this year to date, coming in at three pounds, 4 feet long," Christine said.

Another reason she has made snake wrangling a hobby is because, instead of people killing snakes they find, the Snake Guys are able to safely relocate them..

Said Christine, "Once you work with rattlesnakes, you learn to respect them. They really are an amazing reptile. They are highly intelligent and not the killing machines people think they are. It’s good to have a healthy fear of them of course, but they are really just trying to live their lives and not bother us. Rattlesnakes would rather avoid you if confronted."

The Snake Guys release the snakes they find about 50 miles outside of Tehachapi in a Department of Fish and Wildlife-approved location.

Although the Snake Guys perform their services free of charge to the community, donations are appreciated. Currently this year, donations have been down, and all of their gear is paid for out of pocket.

Donations they do receive have to stretch to help pay for gas, feed for injured/captured snakes, and housing for the snakes since they are all released usually about once a month.

Said Christine, "This gal is proud to be a 'Snake Guy.' We are certainly grateful for the support we receive in Tehachapi and are proud to do our part to contribute to the ecosystem as well as be a service to our neighbors."

The best advice to keep snakes from slithering indoors is to keep your garage doors closed, said Hayton.

"If there is too much debris, we don't go in there and look for them. We are not hunters," Hayton said.

More information can also be found on Facebook at the Bear Valley Springs Snake Guys.