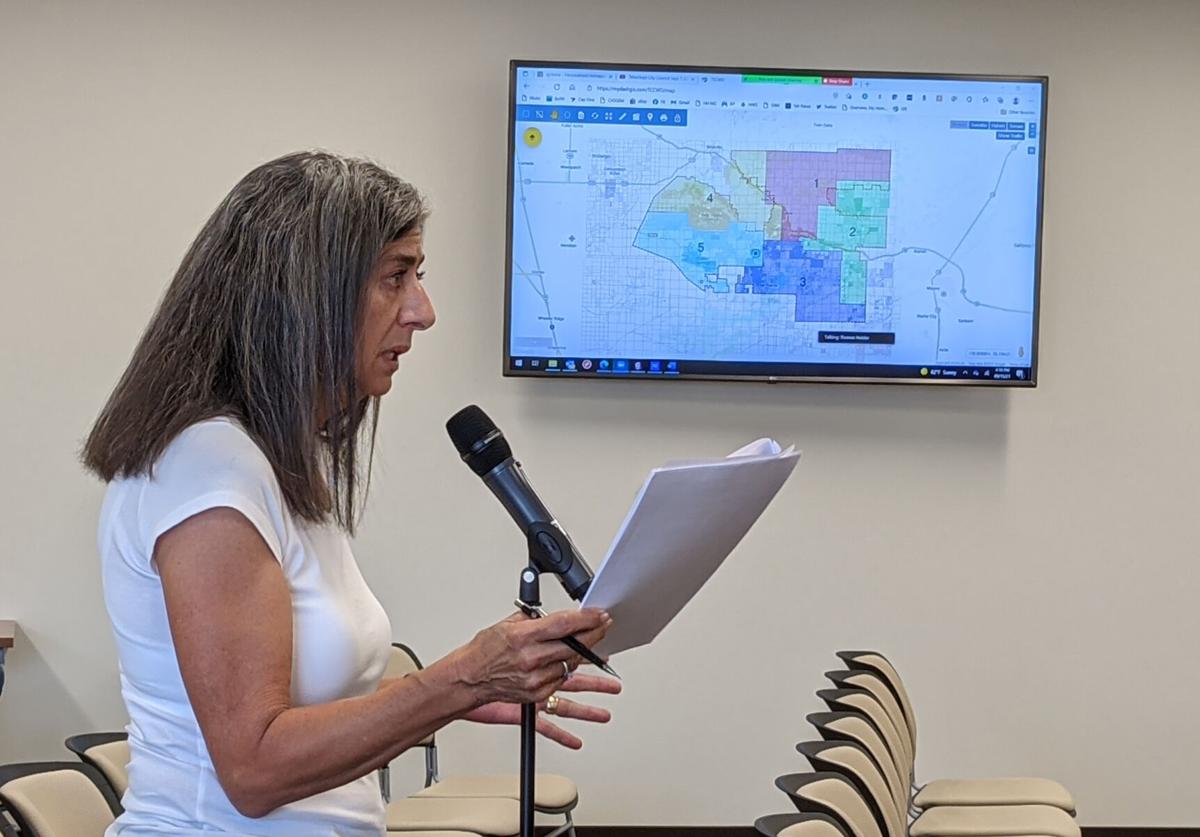 Susan Wells, general manager of Golden Hills Community Services District, asked the board of the Tehachapi-Cummings County Water District to do its “due diligence” and take a look at how area population has changed in the past 48 years. The board decided to continue having representation by division at least through 2022. 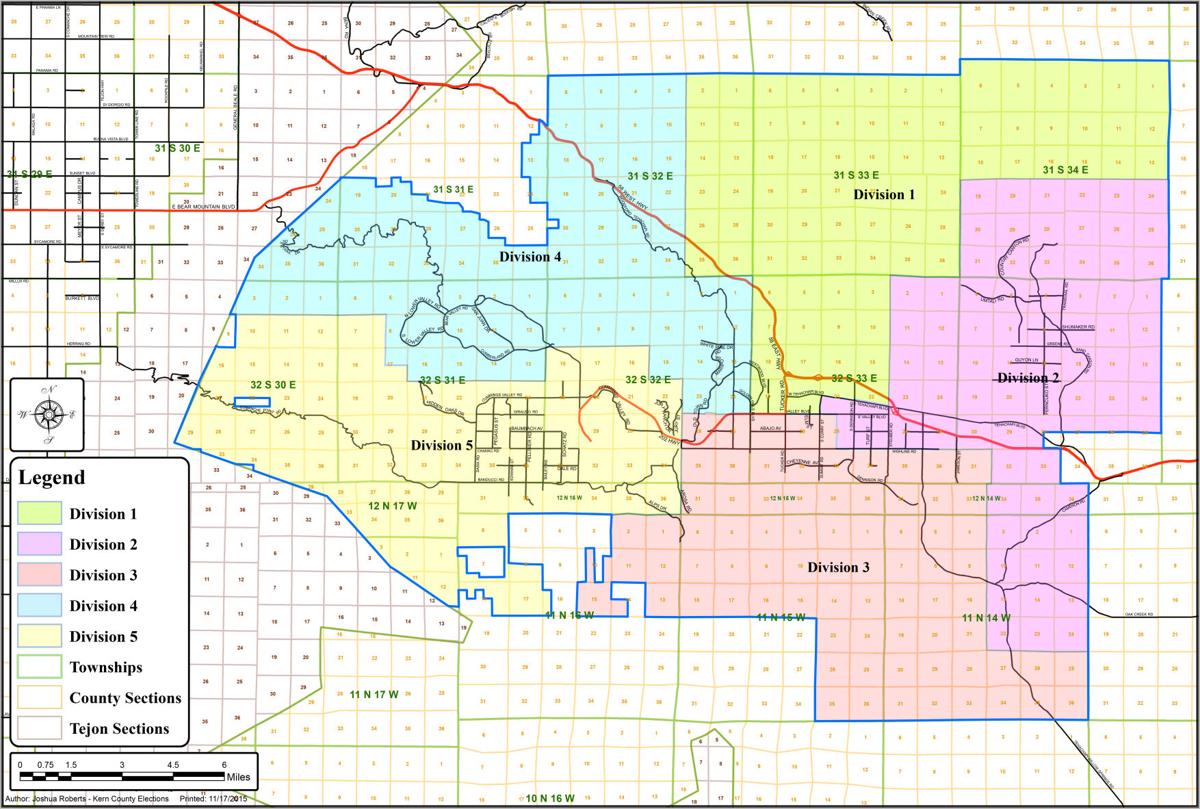 Susan Wells, general manager of Golden Hills Community Services District, asked the board of the Tehachapi-Cummings County Water District to do its “due diligence” and take a look at how area population has changed in the past 48 years. The board decided to continue having representation by division at least through 2022.

A practice put in place nearly 50 years ago is still working.

That’s the opinion of a majority of members of the governing board of the Tehachapi-Cummings County Water District when it comes to how board members will be elected.

The district was formed by voters in 1965. Its first ordinance was dated Feb. 21, 1973, determining that directors would be elected from divisions in accordance with a section of the state Water Code.

Five divisions were established, with roughly equal acreages, as follows:

• Division 1, represented by Kathy Cassil; approximately 53,148 acres (2,619 parcels) and includes much of Golden Hills as well as a portion of the city of Tehachapi.

• Division 2, represented by Jonathan Hall; approximately 47,485 acres (2,287 parcels) and includes most of the city of Tehachapi as well as Cameron Canyon and the southern part of Sand Canyon.

• Division 3, represented by James Pack; approximately 48,828 acres (5,071 parcels) and includes part of the city of Tehachapi, part of the land along Old Town Road, and areas south of Highline Road including Mountain Meadows.

• Division 4, represented by Rick Zanutto; approximately 49,487 acres (7,139 parcels) and includes much of Bear Valley Springs and portions of Cummings Valley.

• Division 5, represented by Robert Schultz; approximately 46,865 acres (3,774 parcels) and includes much of Brite and Cummings valleys as well as Stallion Springs.

The ordinance was passed near the dawn of the large-scale subdivision of unincorporated areas of the Tehachapi region. Although some of the large ranches that comprised much of the district when it was formed had been sold and were being developed by 1973, it was many years before there was much population outside of the city limits.

The population of the various divisions at the formation of the district compared to the present time isn’t documented because the divisions were based on what was considered to be fairly equal acreage (along parcel lines).

Directors are limited to one per division, but voting is “at large” by all registered voters in the district. The state Water Code allows directors to be chosen this way — which is called “from divisions” — or to be elected “by division,” meaning that only voters in a given division may choose their representative. In such a case, according to Tom Neisler, general manager of the district, divisions would be created by population (not acreage).

Cassil shared her concerns about how much the district has changed over the past 48 years at the board’s June 16 meeting.

After doing research, Cassil said she learned that only 541 voters participated in the creation of the district in 1964. Today, she said, the county Elections Office reports that there are approximately 42,800 registered voters in the district.

She told fellow board members that she believes once they see the inequality of the population statistics it will become obvious that basing a division on acreage alone does not make sense.

Following up on Cassil’s concerns, Neisler gathered information for the board’s review at its Sept. 15 meeting.

He provided an estimate from a data company to provide basic information for $1,350. From that information, the district would have to adopt updated maps by April 17, 2022, to meet deadlines for the next election, November 2022.

Addressing the board at its Sept. 15 meeting was Susan Wells, general manager of Golden Hills Community Services District.

Wells said she believes the board needs to do its due diligence to get accurate information about the population of the divisions to do a fair evaluation of the issue.

She said Golden Hills is among the water district’s Municipal and Industrial customers and that M&I users pay a disproportionate amount of what it costs to bring State Water Project to Tehachapi (compared to ag users).

Given this, Wells said, it is reasonable for the board to ensure that representation on the board is fair.

The directors briefly discussed whether there were good reasons to invest in coming up with population breakdowns and consider making a change.

Pack noted that when he votes, he considers all residents of the district because election is “at large,” with all areas eligible to vote.

Referencing recent changes to how council members in the city of Tehachapi are elected, Hall noted that some changes in election procedures have been made to ensure that minority communities are represented.

Pack made a motion not to discuss the matter any further, at least not until after the next election, but his motion died for lack of a second.

Schulz then moved to close discussion and not have any further expense, time or effort toward changing the method by which directors are elected — or any changes to the current division boundaries and stated that for the 2022 elections, the board will continue to be “from” divisions as stated in the ordinance approved in 1973. His motion was seconded by Zanutto and passed 3-0 with Cassil and Hall voting no.