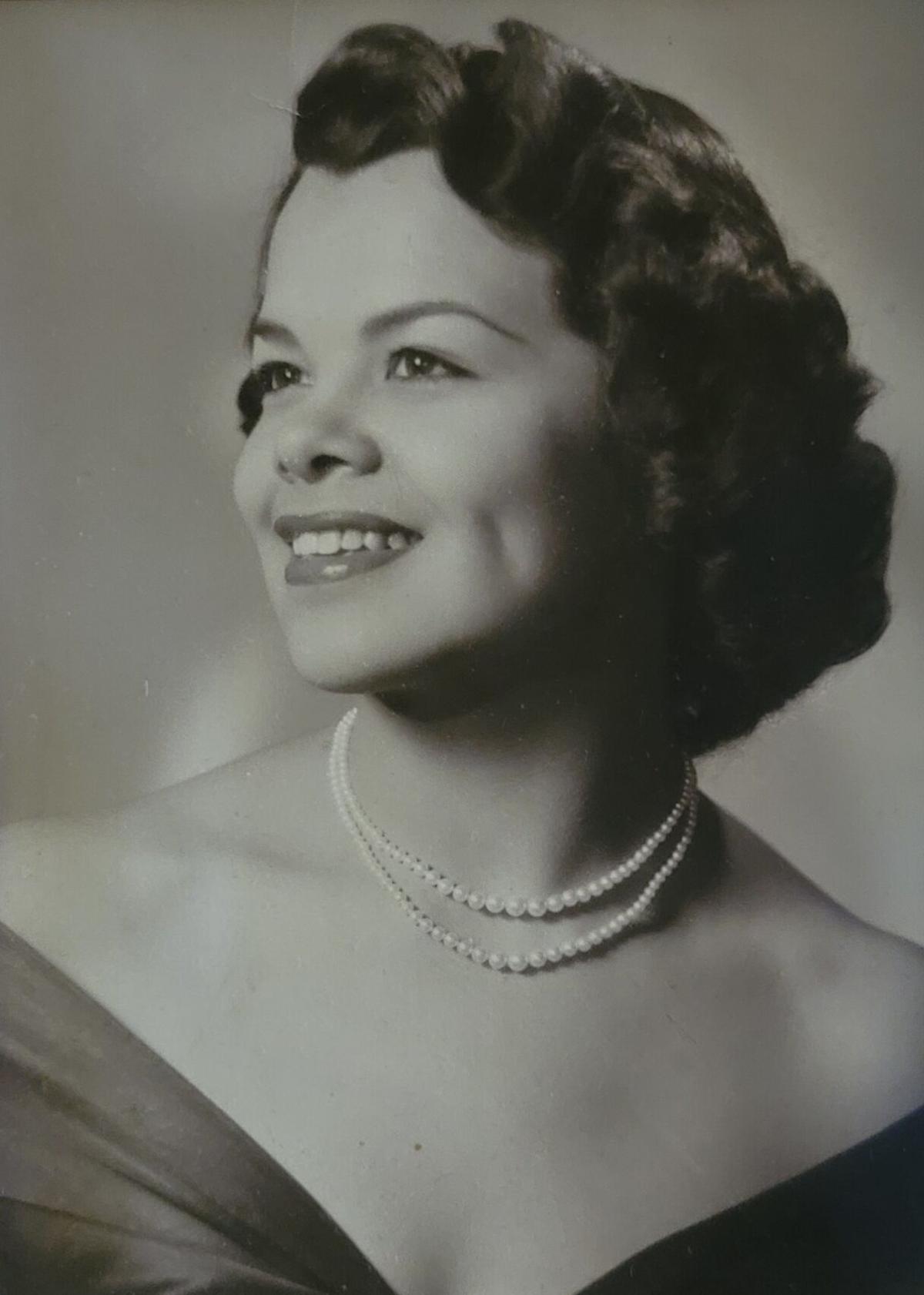 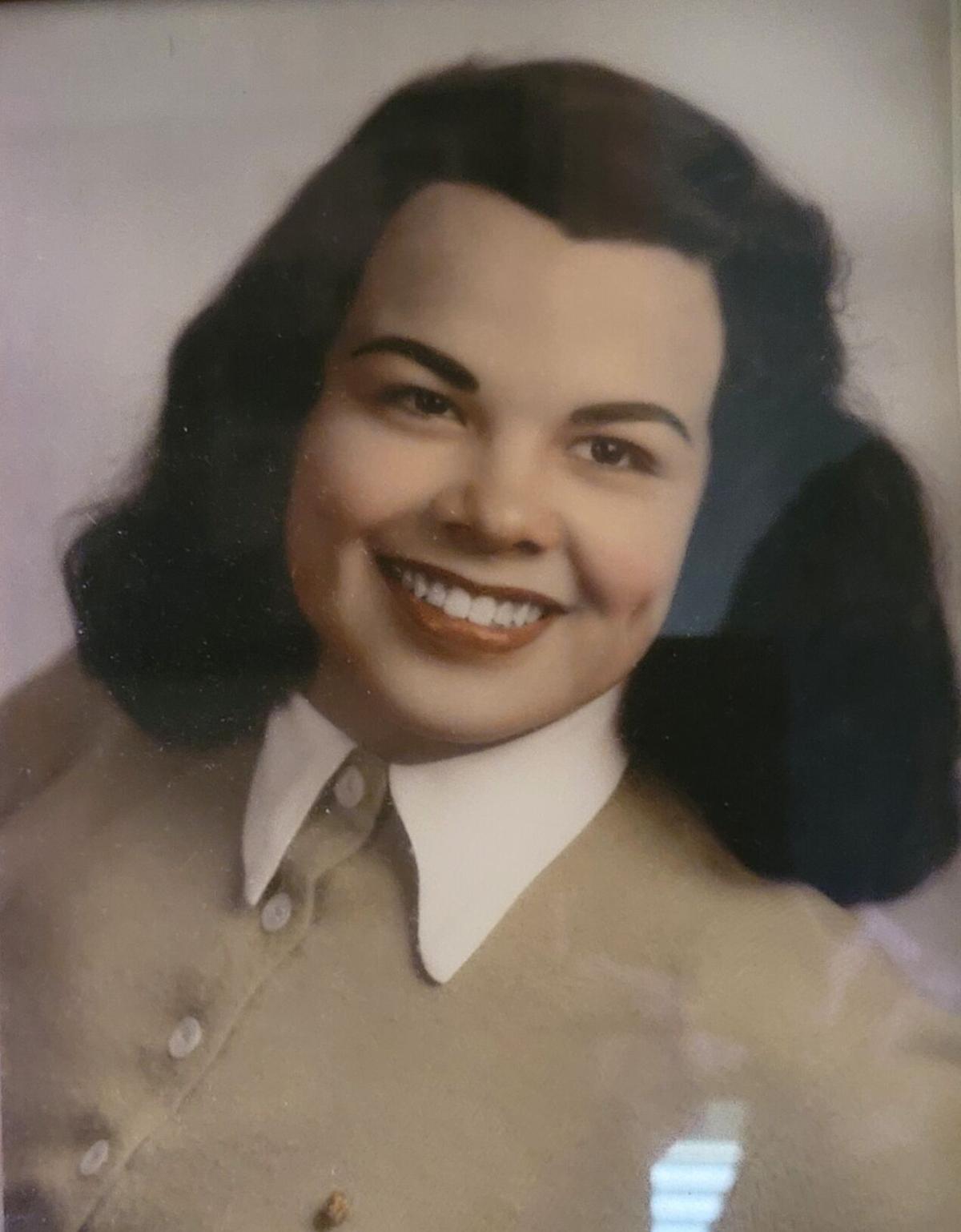 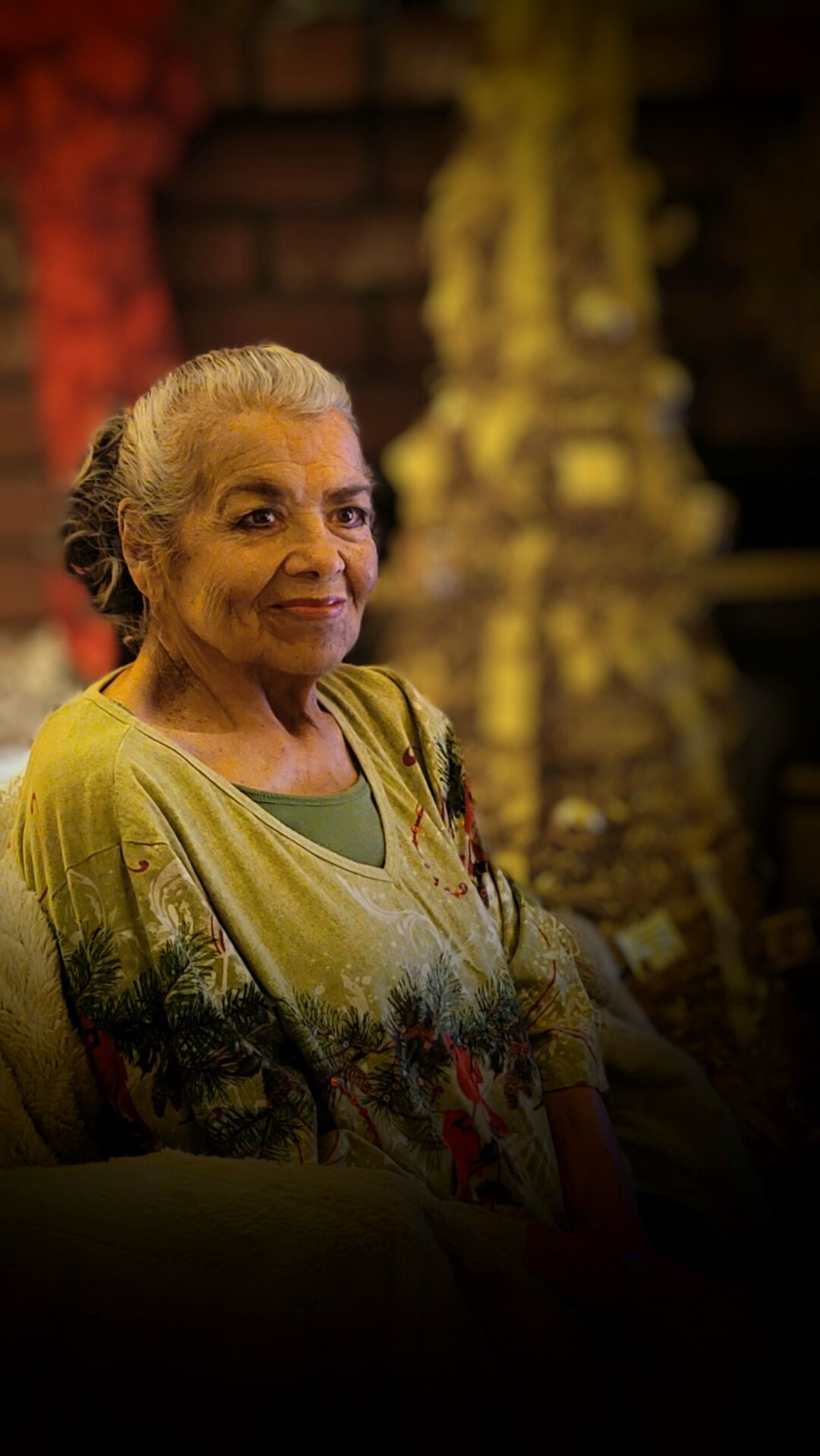 Gloria M. Fifer was laid to rest on Thursday, Sept. 30, 2021. She was 90. A lifetime resident of California, Gloria’s life began and ended in Tehachapi. She was the third child born to Benjamin and Petra Martinez on April 20, 1931. Gloria was born by mid-wife in a little house across the street from her family home on F Street. Her childhood home, “The Old Ben Martinez Place,” was alive with profuse color each spring. The vibrant hues were visible nearly year round from various annuals, perennials and an abundance of lilacs and rose bushes. Still growing in the front yard are the two, now giant, almond trees, growing as one, lovingly entwined and twisted together by Gloria’s mother Petra nearly 100 years ago. Petra was a gifted gardener, and a frugal homemaker, traits she passed on to her daughter Gloria.

Gloria was the middle child of five siblings. The eldest was Benjamin Jr., followed by Conchita, Gloria, Laura and Bette. Brother Ben was a posthumous Purple Heart and Silver Star recipient for gallantry in action after he was killed defending his troops on the Philippine island of Luzon in January 1943. Gloria was nearly 12 years old at the time. She honored her brother’s memory her entire life, and, it is almost fitting that she left this life and joined her brother in heaven on the Friday of Memorial Weekend.

Before Gloria graduated from high school, she met and fell in love with Clyde E Fifer. Clyde was stationed at Edwards Air Force Base. At the time, it was not uncommon for Tehachapi businesses to host outdoor dances and roller skating evenings for the residents of Tehachapi, and, the local military servicemen were allowed to attend. As one of the few airmen with a car, Clyde and a carload of fellow airmen found themselves on their way to Bakersfield for a little R&R when they decided to check out the roller skating event instead. That memorable stopover was when Clyde first caught sight of Gloria and her accomplished abilities as a roller skater. Gloria enjoyed athletics all of her adult life, particularly swimming, water skiing, bowling and snow skiing. She was playing tennis once to twice a week up until the time of her retirement in the mid-1990’s.

While Gloria attended school she was a good student and studied hard. Being a small town girl, the lure of Hollywood movies fascinated her and Gloria went to the original Beekay Theater to see the movies as often as possible. She was immensely interested in the British Monarchy and all things royal and had a great admiration for Queen Elizabeth. When Gloria was not studying or at the movies she earned extra money by working in the orchards picking fruit, usually pears, as there were more pear trees then than exist now. Following Gloria’s high school graduation, she lived in Los Angeles with her aunt Tia Vita while she was employed by the Los Angeles School District at Franklin High. Gloria traveled by bus while living and working in LA, but she made regular trips back home to Tehachapi by train, as there was regular scheduled passenger service at that time to the depot which stands to this day as the Depot Museum at the corner of Green Street and Tehachapi Blvd. Visitors to the museum will find hanging on a wall, a framed letter, penned by Gloria, where she wrote about many of her childhood memories, visits to Catalina Island and the train travel that was required as part of the journey to get there.

Gloria and Clyde began a long-distance courtship while she worked in LA and Clyde continued his enlistment at Edwards Air Force Base. Eventually, Clyde took his mother with him to meet Gloria’s father in person when he asked Gloria’s father for her hand in marriage. Along with Clyde’s request was a promise to love and cherish her and to provide Gloria with a washing machine and his mother’s sewing machine as contributions to their marriage. The sewing machine is still in working condition and remains in the family to this day. The sewing machine became a significant aspect of Gloria’s life. She was an extremely talented seamstress, strengthened further by the in-depth college courses she attended at Long Beach City College. The courses included luxury suit creation, dressmaking, tailoring and the art of millinery (hat making).

Gloria and Clyde were married in October 1953 at the original location of St. Malachy Church, on the corner of West F and Pauley streets, the current home of Bank of the Sierra. Gloria held accounts with the local bank, and up until Covid19 restrictions, she always enjoyed banking in person at the second Tehachapi branch located on Mission Street. Although a modern and accomplished woman, Gloria preferred old-fashioned counter service banking and never used an ATM card. Since the recent Mission Street bank branch closure, it’s been a bittersweet task for family to handle Gloria’s financial matters in the same building where she was married and where, in fact, all of her children were baptized.

Following their marriage in Tehachapi, Gloria and Clyde made their first home in Burbank, Calif., where they also started their family. A new opportunity and job transfer for Clyde relocated them and their three children to the city of Lakewood, near Long Beach, where Gloria continued to be a fulltime homemaker and put her aspirations for a higher education on hold.

Gloria was a devoted and loving wife and mom; and a parishioner at St. Cyprian Church in Long Beach where she was a member of the church choir for nearly 20 years. Gloria discovered her voice in her high school choral group, during which time a recording of her voice was actually created on a glass record, a family treasure that exists today. Gloria’s 1949 high school commencement program revealed that she had the honor of singing a solo as part of the graduation ceremonies.

While Gloria’s kids were in school she supported all of their activities in swimming, diving, water polo, softball, volleyball, Little League baseball, Pop Warner football, Cub Scouts and Camp Fire Girls. A tireless volunteer, Gloria even took on the role as a co-leader of her daughter’s Camp Fire group for a few years; during which time, as a nod to her past, she made certain a trip to Catalina Island was included. Family vacations were often road trips that included camping, water skiing, touring California’s state and national parks, and, visiting every single California Mission that crossed her path. Gloria enjoyed recordkeeping and working with figures, and when the children got older she handled the bookkeeping at a popular neighborhood restaurant and watering hole, The Eldorado. Throughout all of these years Gloria was also a member of the Lakewood Long Beach Chapter of Mothers of Twins Club.

From 1980-1988 Gloria was employed at Long Beach City College where she served as the secretary to the Associated Women Students Advisor. It was a dream job that she loved, and, that affection was reciprocated by the college students that called her “mom.” Between 1988-1992, Gloria worked at the college in the purchasing department. It took almost until she retired, but, never a quitter, in May 1988, Gloria finally, and very proudly, received her Associate of Arts degree from Long Beach City College. After retirement she and Clyde sold their home in Lakewood and returned to Tehachapi, where their relationship first began. They moved to a home in the Golden Hills area, near the historic location known as Old Town.

Gloria, together with her husband Clyde, thoroughly enjoyed hosting family in her home and making memories together. She loved exploring various local events and encouraged family to join her. Three of her favorites were bus tours, cooking classes and picnics. The bus tours were hosted by the Cummings Valley Protective Association, usually narrated by Chuck McCollough and Jon Hammond. The traditional Mexican cooking workshops were held at the Mourning Cloak Ranch and Botanical Gardens, hosted by Marian and Ed Sampson. They were taught by San Francisco Chronicle cooking editor and cookbook author Jacqueline Higuera McMahan. The high point of every August, and always on her calendar, was the yearly Oldtimers Picnic. Other associations and events she enjoyed immensely were the Friends of the Depot, the women and kind fellowship of the AAUW and the delightful friendships formed in the Red Hat Society under Queen Maha.

Gloria loved the movies, live theater and music throughout her life and upon retiring in Tehachapi was a frequent patron at the Hitching Post, the Beekay Theater, fundraising events and symphony performances. Gloria was especially fond of attending craft shows, always drawn to towards items crafted with a sewing machine or painted by hand; two talents that she herself possessed.

Gloria’s father came to California from Mexico, as a teenager, in 1917. He was a strict, hardworking man and was employed at the Monolith cement factory for over 40 years. During trips back to visit family in Tehachapi, Gloria’s children delighted in waving to Papa Ben from the road while he was at the train controls, all while their father Clyde drove fast enough to keep pace with the train. Mural artist, Art Mortimer, used a family photograph as reference to paint the image of Gloria’s father as one the Monolith cement factory train engineers, a post Gloria’s father Ben held until his retirement. The Monolith Mural exists today at the corner of F and Green Streets.

Gloria celebrated her 90th birthday on April 20, 2021. She had some of her favorite meals, some by special request, and enjoyed birthday cake nearly every day for two weeks along with receiving many loving cards, flowers, phone calls, and visits from family and friends. She flashed her famous dimpled smile a lot. Just five and a half weeks later, Gloria showed us her dimpled smile for the last time.

Gloria M. Fifer passed away peacefully after midnight on Friday, May 28, 2021 after receiving solemn last rites by Fr. Mark from St Malachy Church the prior evening. She was home in her own bed, surrounded by loving family and caregivers. Covid19 was not a factor. The family extends warm and heartfelt thanks to hospice nurse Brenda and caregivers April, Kathleen, Melissa, Ronda, Cyndi, Kay, Brieanna, Cheryl and Pam, for the loving care and companionship provided tirelessly to Gloria.

Gloria was preceded in death by her first child, infant daughter Patricia Diane; her parents Benjamin and Petra; and brother Ben and oldest sister Conchita Koch (Robert, deceased). Her beloved husband Clyde died in 2010, on Feb. 15, the day after their most cherished holiday for them as a couple, Valentine’s Day. Gloria traveled to the Holy Land after Clyde’s death, a cherished trip that she recalled often.

On Sept. 30, 2021, a Rosary and Mass were held at St. Malachy Church, followed by prayers and interment at Tehachapi Westside Cemetery. A Memorial and Celebration of Life was held afterward at the Rose Garden Estate, where a luxurious tailored dress and pant-suit ensemble, created by Gloria, was on display along with several of her skillfully handcrafted millinery hats. In lieu of flowers, contributions in memory of Gloria Fifer are encouraged to be sent to the Norbertine Monastery, 17831 Water Canyon Road, Tehachapi, CA 93561. Phone/Fax: 661-823-1066 https://norbertinesisters.org/donate/

Wood Family Funeral Service in Tehachapi was entrusted with care.