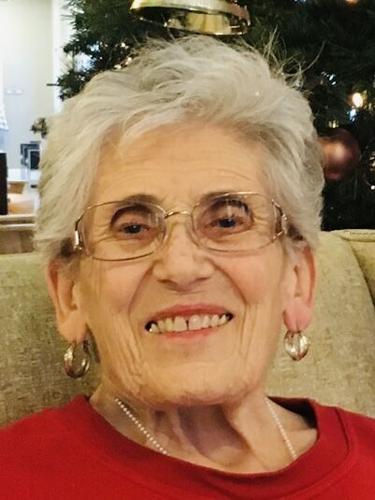 Loula Koutroulis (née Simitzes) has joined her husband, family, friends and the rest of the ranks of angels smiling down on us from Heaven. We’ll fondly recall her grin, one that you can see in every photograph of her, and her zest for life that almost surpassed her joy for helping others.

She came to California from Butte, Mont., where she was born on May 29, 1932, where her family emigrated from Greece in the 1920s. After moving to San Diego and getting hired as a stenographer for the FBI, she met her husband, George, who stole her heart and won her hand, whisking her away on a fairytale honeymoon to Mexico.

Her brilliant mind set hard to the task of raising three children, enhancing her skills in sewing buttons, mending clothes and cooking healthily. Health was one of her primary passions. She had an axiom for every situation: an ounce of prevention is worth a pound of cure, a penny saved is worth a penny earned, and so forth. She had endless pennies for thoughts, and she was always down to make you feel the pangs of winning and losing in games such as Aggravation or Scrabble. She prioritized neighborliness over isolationism, and she always threw the most festive Fourth of July parties, awash with her staple craft cocktail: frozen lime daquiris. If you didn’t end the night eating watermelon, you didn’t stick around long enough.

And some people can’t stick around long enough for all the people whom they touch. Loula was a sage, a wisewoman, a mayor’s wife. She grew berries, planted eggplants, jammed plums, and she could salve any wound or address any foible with an alacrity and cunning that only a mother develops. She would bake Greek sweets that became popularly requested.

When her children became more self-sufficient, she began working for the Tehachapi Unified School District’s District Office, becoming a secretary to the school psychologist. In her golden years, she went to work on a cruise ship, sharing her crafting savvy alongside her best friend, Connie Pappas, traveling the world. A pragmatic individual to the core, she scrimped when others splurged, but she was never parsimonious with her grandchildren, preferring not to spend on picayunish whims or desires.

As is the gardener, so is the garden, some say. Her garden was always in full bloom, each flower nurtured with the attention she gave to each individual in her life, with her Miracle-Gro smile and seeds of love planted in so many hearts, such as those who survive her: her children, Suzanne Hutchison (sp. Doug Hutchison), Deno Koutroulis, and Anthea Koutroulis; her grandchildren, Kristan Caffee (sp. Brock Caffee), Nicholas Goodwin, and Tyler Hutchison; her great-grandchildren, Savannah Warren, Robert Warren, and Harris Caffee; her cousins, Tom Simitzes and Lucy Simitzes; and her niece and nephew, Angela Taylor and George Simitzes. She is predeceased by her husband, George C. Koutroulis; her father and mother, George A. and Anthoula Simitzes; her brother, Paul Simitzes; her mother-in-law, Vasiliki Koutroulis; and her sister- and brother-in-law, Helen and Gus Huntalas. May the love she planted in our hearts continue to flower, and may her memory remain eternal in this temporal world as she guides us from above.