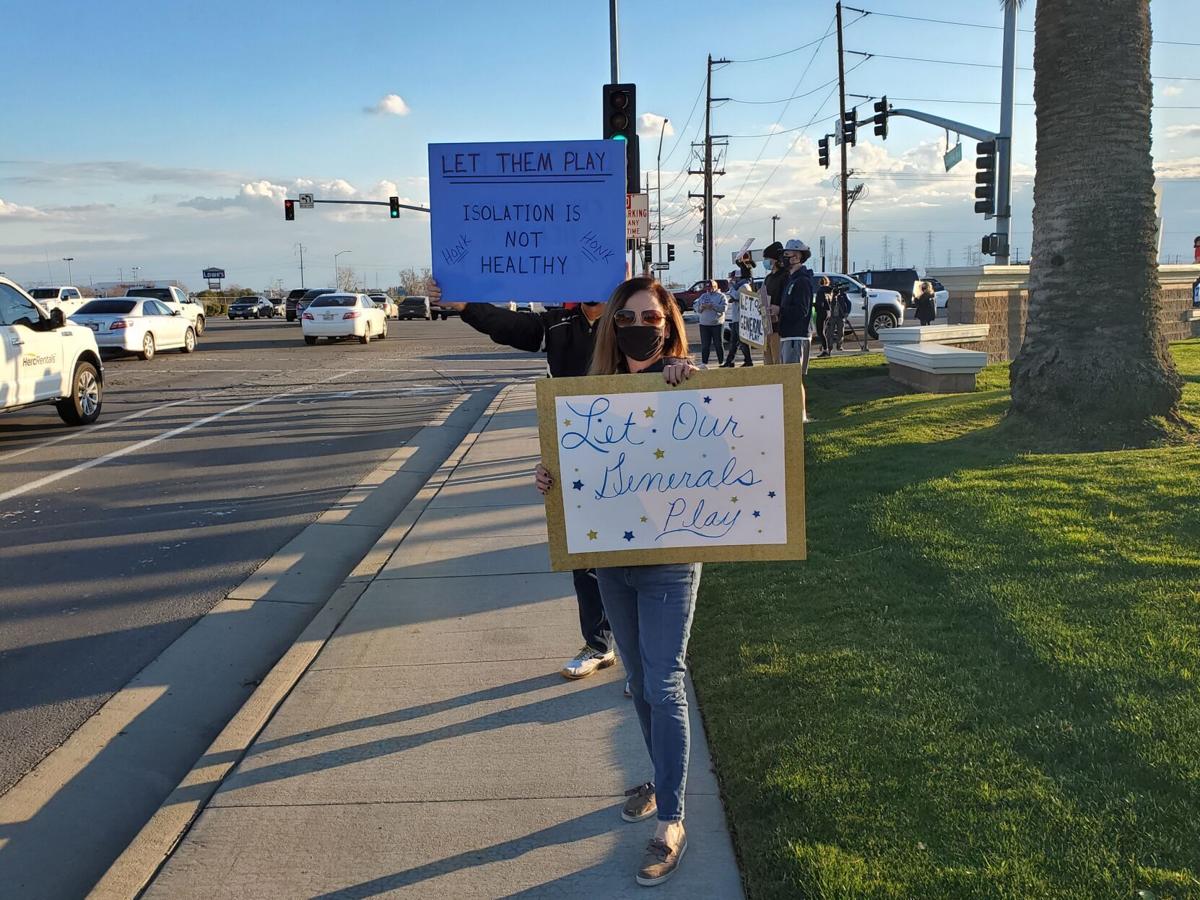 Lori Sundgren and her husband, Darin, took part in a Let Them Play rally in Bakersfield on Friday. Lori, whose son Devon is a three-sport athlete at Shafter, helped organize the event, which drew nearly 100 participants. 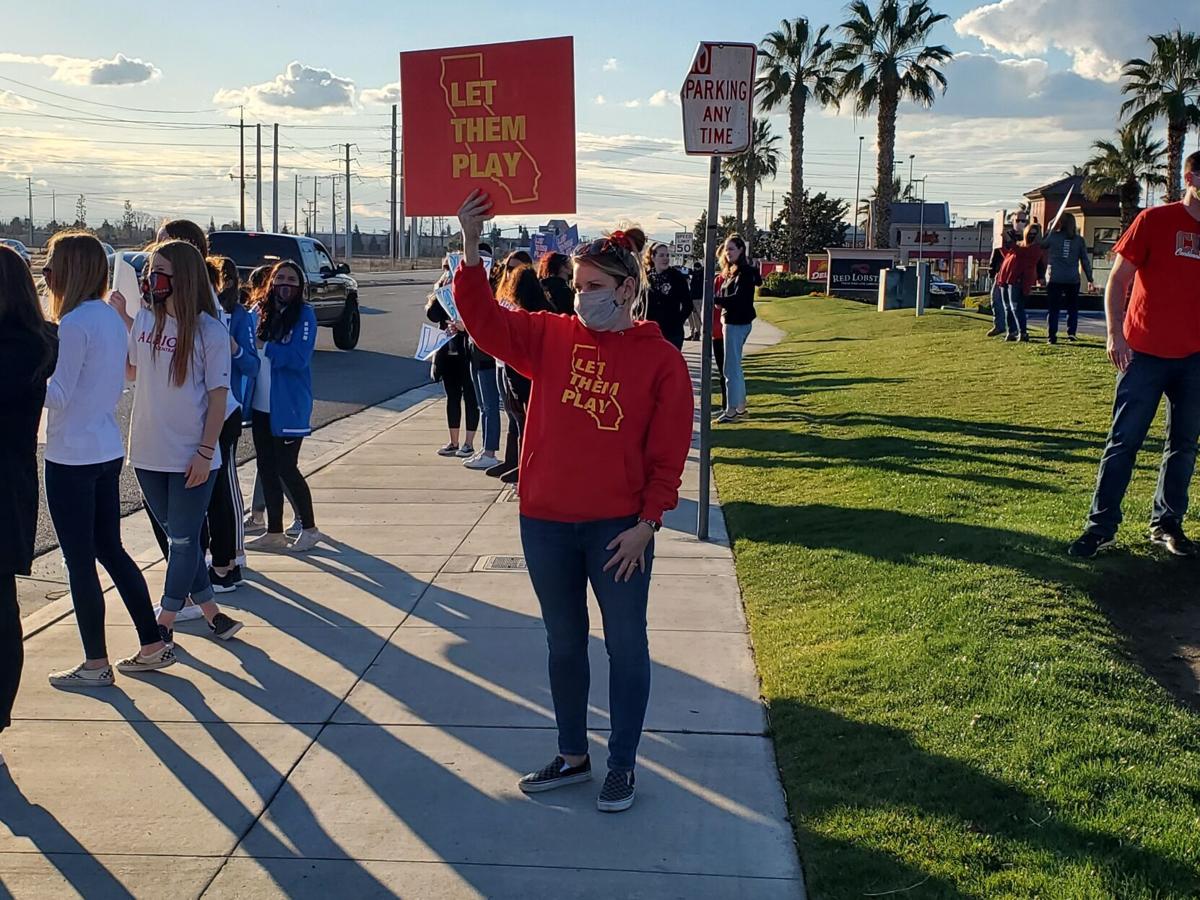 Parent Heather Manning takes part in a Let Them Play rally in Bakersfield on Friday. 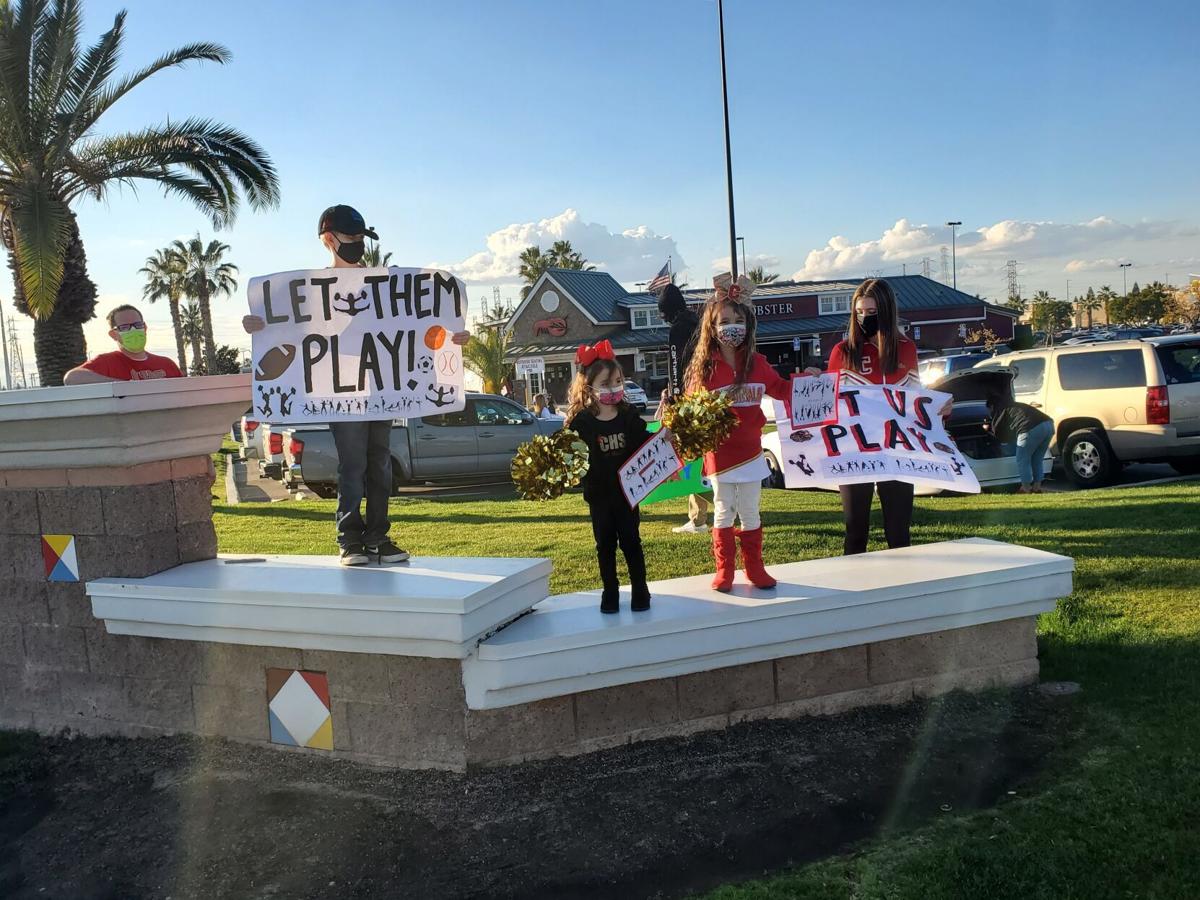 Representatives from the Centennial Cheer Squad joined the Let Them Play movement at a rally in Bakersfield on Friday.

Lori Sundgren and her husband, Darin, took part in a Let Them Play rally in Bakersfield on Friday. Lori, whose son Devon is a three-sport athlete at Shafter, helped organize the event, which drew nearly 100 participants.

Parent Heather Manning takes part in a Let Them Play rally in Bakersfield on Friday.

Representatives from the Centennial Cheer Squad joined the Let Them Play movement at a rally in Bakersfield on Friday.

Lori Sundgren says student-athletes like her son Devon are missing out on a lot more than competition during California's prolonged athletic shutdown.

Devon, a junior who plays football, basketball and runs track at Shafter High School, is among the countless athletes in the state who are still waiting for any sign that they will be able to compete this season, and patience is wearing thin.

While Lori says Devon has expressed frustration that he is missing out on potential opportunities to earn college scholarships, she says such problems are the least of her concerns.

Seeing kids from other states get to continue their athletic careers, Lori believes, is doing further damage to the psyche of kids in California.

"These kids are losing their childhood," she said. "At the same time, we're in the social media age, and they're seeing kids all over the country still living out their childhoods. I think it's absolutely devastating physically and mentally."

With hopes of getting the attention of Gov. Gavin Newsom and other state officials, Sundgren helped organize a local Let Them Play rally in Bakersfield on Friday. The event was one of dozens held throughout the state, organized by the group Let Them Play CA.

Sundgren was joined in the planning process by Maddie Fimple, whose son Tyler plays football at Centennial High School.

Sundgren and Fimple had never even met in person until Friday, but have spent the last two weeks connecting on Facebook, hoping to get the word out to parents and students from all over the city.

The Bakersfield rally was held at the corner of Coffee Road and Rosedale Highway, where roughly 100 participants held up signs and were frequently greeted with supportive honks by passing motorists.

"A lot of people (at other rallies) were negative about not having enough people to make a stance," Fimple said. "We lined up the streets ... and we had a lot of followers, which is great. Me personally, I feel we exceeded expectations."

Sundgren was also pleased with the turnout, and was particularly happy that the majority of spectators were wearing masks, even saying she didn't have to distribute any of the extras she brought with her.

Attendees expressed a need to relaunch youth sports as well, with Sundgren noting that "youth sports is the only sector that has never been allowed to open since March."

Whether such efforts prove to be successful remains to be seen, although some in attendance Friday did express disappointment with a continued lack of progress.

Though an order by the state earlier in the week allowed for high schools to conduct a cross country season while in the purple tier — the most restrictive tier in California's COVID-19 reopening grid — the Kern High School District currently has no plans to move forward with a season.

While Manning has been able to take her kids to compete in football and soccer tournaments in Arizona, she knows many student-athletes don't have such opportunities. And even for those who do, circumstances are far from ideal.

"When you can't play in your own state, that's really sad," Fimple said. "It's sad what we're doing to these kids."

With organizations like the Golden State High School Football Coaches Community fighting to get a face-to-face meeting with Newsom, Sundgren is hoping to get youth and high school sports removed from the tier system, saying she believes teams can find proper safety measures needed to play.

"We could have no fans in the stands. I want to be in the stands watching my kid, but if I have to watch on a livestream, I'll take it," she said. "I think if they need to wear masks, if we need to limit the amount of competitions ... whatever it takes."