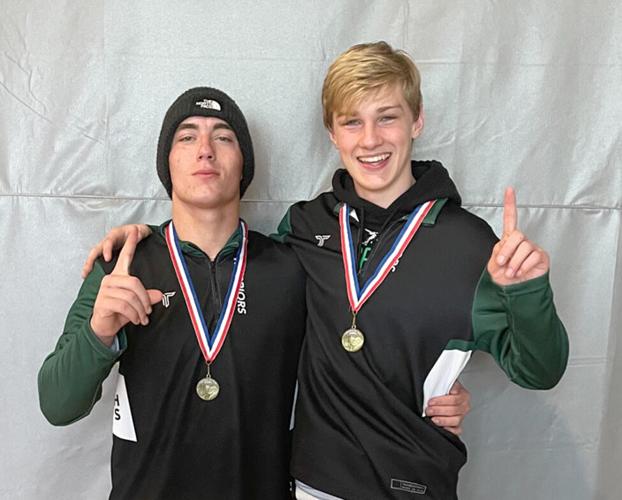 Tehachapi’s Elijah Graves and Levi Hart took CIF titles in their weight class and were awarded first place medals at the Central Section Division V Tournament. They also qualified for the Masters Tourney. 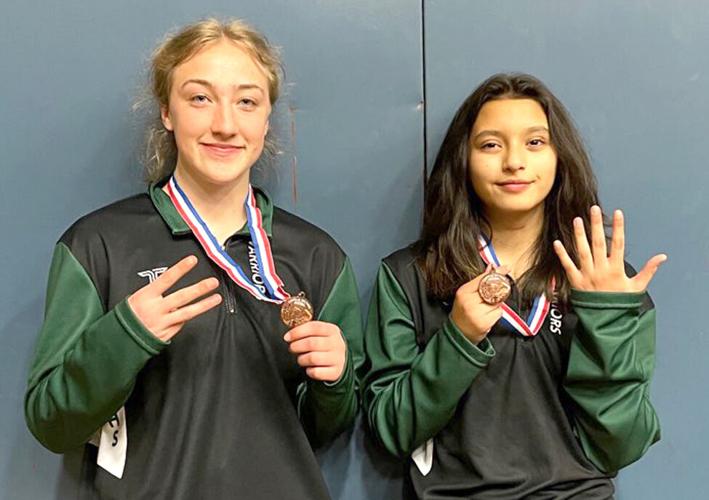 Tehachapi’s Elijah Graves and Levi Hart took CIF titles in their weight class and were awarded first place medals at the Central Section Division V Tournament. They also qualified for the Masters Tourney.

Mountain Wrestling had a memorable weekend in the CIF Section Finals with four wrestlers placing in the top five in their weight class. The results qualified them for an invite to this weekend’s prestigious Masters Tournament. Two wrestlers also claimed CIF titles.

Elijah Graves (162 pounds) and Levi Hart (147 pounds) both went undefeated at the Division V Section Tournament in Madera and won by decision in their final bouts.

Graves won his championship by a 4-0 decision over his opponent from Fresno-McLane, also taking wins by pin in previous rounds over opponents from Fresno, Bakersfield-East and Hanford West.

Hart also took an individual title by a 7-5 decision over his opponent from Fresno-McLane, also taking wins by pin in the earlier rounds over opponents from San Luis Obispo and O’Neals-Minarets.

If any of Tehachapi’s wrestlers place in the Masters Tournament this weekend, they will clinch a berth in the state tournament at Mechanics Bank Arena in Bakersfield starting on Feb. 24.

The Lady Warriors will be entering the CIF Division 5 playoffs on a high note after posting a 2-1 victory over Bakersfield-West.

Tehachapi (10-9-3; 2-6-1 SYL) also had a narrow 3-2 defeat against Golden Valley last week, with Tyller Hensler and Kailey Kolesar both recording goals and Bethany Sierra and Giselle Cardenas both registering assists. Lilian Ledezma had 16 saves at keeper.

The Lady Warriors earned the No. m6 seed in the CIF Division 5 playoffs and will host No.11 Riverdale at Coy Burnett Stadium this Tuesday at 6 p.m. The winner of that game will go on to face the winner of No. 3 Bishop and No. 14 Wasco in the quarterfinals on Thursday.

The Warriors played inspired basketball in the final game of the season this past week but still fell in a close defeat to West, 58-55.

Tehachapi (4-15; 0-9 SYL) played well at the start, surging to a 30-23 halftime lead over the Vikings behind a loud and spirited student body cheering them on from the stands.

Senior Wyatt Baldwin led the team in scoring with 18 points followed by Corey Perkins with 15 points.

Mountain Soccer closed their season this past week with the most goals scored in one game this season in a defeat to Bakersfield Christian, 5-3.

Calling all community tennis players for practice and drills

The high school boys tennis has started practice for the upcoming spring season. If there are any members of the community who have played tennis in the past and are interested in coming to drills and practicing with the team, you are encouraged to attend.

Practices will be Monday through Friday every week from 2:45 to 4:30 p.m. until the season starts in late-February / early March. For more information, please contact Tom Shea at tehachapisports@gmail.com.

Girls Soccer (if they win on Tuesday) v. winner of No. 3 Bishop / No. 14 Wasco in CIF Playoffs Quarterfinals: Varsity 6 p.m.

Girls Basketball (if they win on Wednesday) v. Winner of No. 1 Sierra / No. 16 Ridgeview in CIF Playoffs Quarterfinals: Varsity 6 p.m.