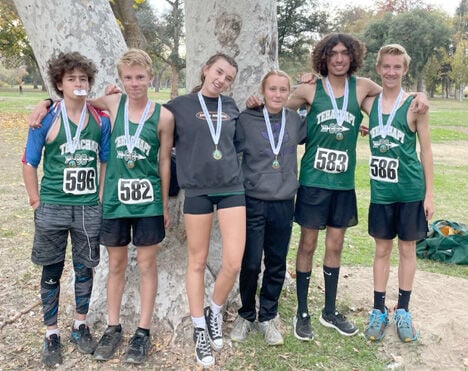 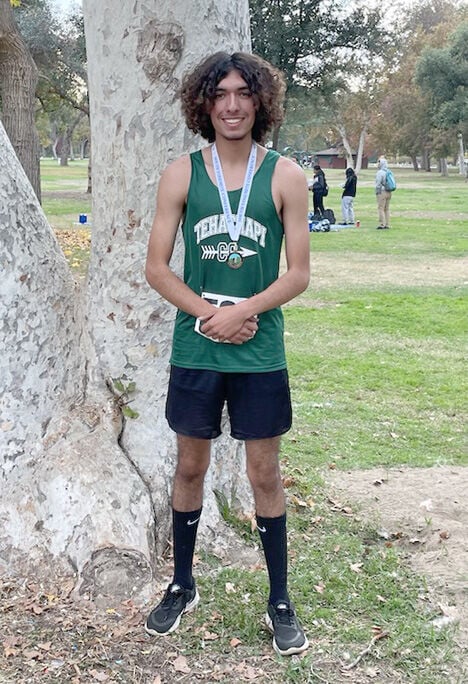 Starting the event off for Tehachapi was the Frosh/Soph boys, who toed the starting line of the two-mile course and concluded with a second-place finish in league action. Leading the way was Colter Grenz (Second – 12:49), Samuel Torres (Fourth – 12:58 ) and Walker Fleming (Seventh – 13:13 ). All three runners were rewarded with individual medals for their outstanding effort.

Next up were the JV girls and they did not disappoint on their two-mile route. A stunning 100-yard dash near the end of the race saw Averee Napier (14:39) out-duel her opponent from Bakersfield Christian to claim first place overall in the SYL. Kylee Steele entered league finals ranked eighth in the JV division and finished the day fourth overall in a time of 15:49. Both Steele and Napier also picked up individual medals on the day.

The varsity girls stepped up next and as a team, finished in third place, just one point from capturing second place overall. Outstanding Junior Emily Valdez (23:03), who was ranked eighth in the SYL, was in the top four for an all-league finish, but unfortunately tripped and fell at the two-mile point of the course. Despite the fall, Valdez showed true Warrior spirit and determination to get back up and end the race as the top THS lady, finishing 13th overall.

The final group was the varsity boys, with the highlight coming from Senior Jose Flores (17:29), who capped his SYL career by posting his best time of the year and taking third place overall to medal and finish as an all-league SYL runner.

The season officially reached the end for most of the THS Runners. However, for a select group, Warrior Cross Country will travel to Woodward Park in Fresno on Thursday, Nov. 18 to compete in the CIF Central Section Valley Finals.

The Tehachapi Warrior Boosters is seeking help from the community to support all Tehachapi High School athletics for the 2021-2022 school year.

The Boosters recently held a meeting and elected new officers, with Maria Curiel (president), Corey Costelloe (vice president) and Monica LaMonte (secretary) running unopposed. There is still an open position for treasurer and team representatives for the majority of sports in the upcoming winter and spring.

Tehachapi High Athletics cannot function without the support of the Booster Club. If you are a parent of a Tehachapi High student athlete, we need you, please get involved and support the One Town – One Team movement!

For more information, please contact via email gowarriors@thsboosters.com, call 661-823-1668 or go to thsboosters.com. Meetings are held every second Wednesday of the month at the TVRPD Board room located at 490 W. D St. Go Warriors!