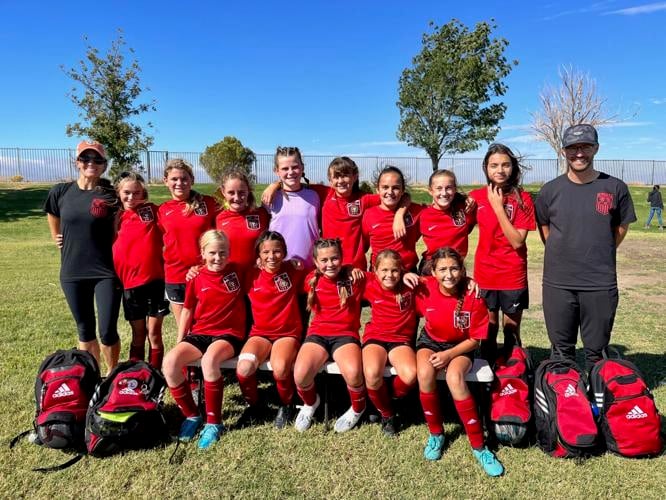 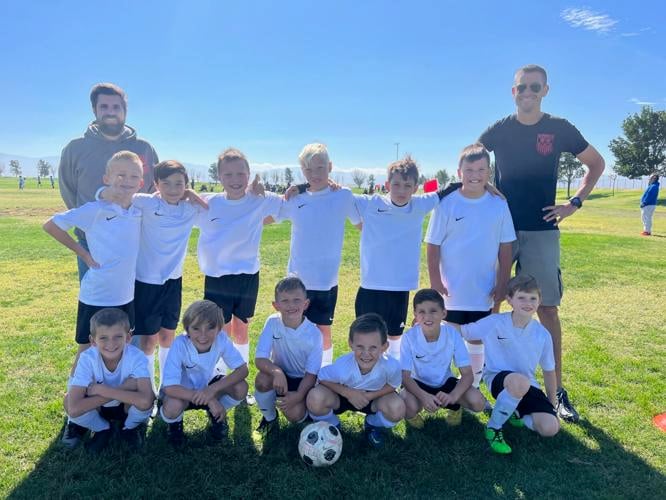 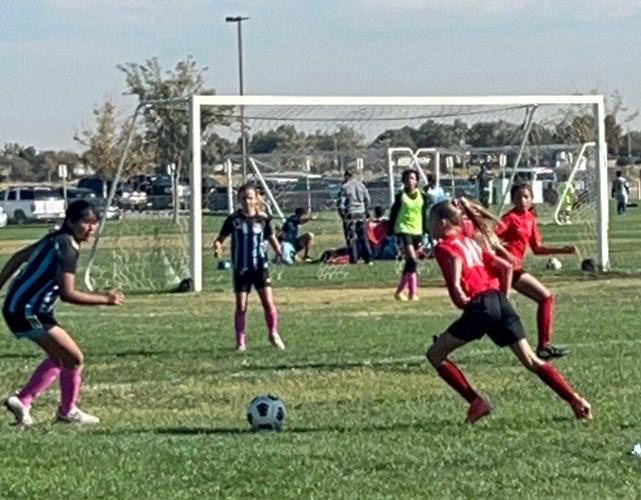 Jessica (#10) in the foreground with goal scorer Val Casas in the background. 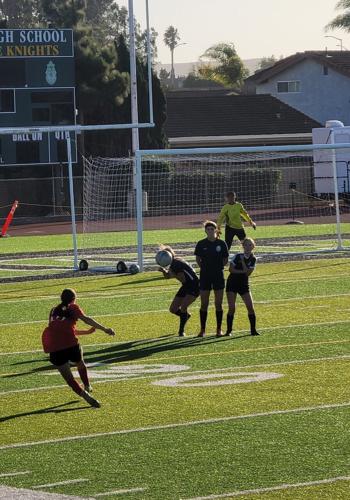 Number 13 Hannah Tyree hits a free kick at the wall which narrowly missed the front post of the goal.

Jessica (#10) in the foreground with goal scorer Val Casas in the background.

Number 13 Hannah Tyree hits a free kick at the wall which narrowly missed the front post of the goal.

For the Gryphons Club Soccer teams, the fall weather season has definitely started. The lower temperatures are a welcome break from this summer's heat, but the high winds during a soccer game can surely play tricks on the most experienced players.

The Gryphons Girls 2010 team traveled to Lancaster Saturday to face an Autobahn Soccer Club who last beat the Gryphons team 4-1. Early in the first half, #4 Val Casas used her speed and athleticism to get around the last defender and as she approached the goal, she kept her composure and slotted the ball to the far side of the goal for a Gryphons lead of 1-0 that was held for 90 percent of the game. Jenna Jones, Chloe Schneider and Victoria Saavedra also provide.

Jessica Cookson, Keira Porter, Avery Asher and Indie (Posh) Spina all made critical plays in the midfield the contributed to the gryphons dominating against the Autobahn Club. The defensive line of Elle Gracian, Emma Smith, Evie Butler and Audreyanna Elliot was solid as always, routinely shutting down the Autobahn attacks and pushing the ball to the sidelines to start the attack.

Heather Maciejewski continues to prove why she is the best goal keeper in the league. Battling against 25 mph winds the second half was not easy, but the girls pushed through. With 10 minutes left in the game, the Gryphons failed to clear the ball out of the back end as it took an odd bounce with the wind, and while Maciejewski made an impressive point blank save on the first shot, Autobahn followed it up with a low shot to the corner. Gyphons tied 1-1.

Coach Jamie Cookson said, “We obviously want to win, but overall the improvement of each player and the team as a whole this season has been astounding. They outplayed the other team both mentally and physically.”

The Gryphons Girls 2004 team played their first game of the weekend in a windy and really rough mostly dirt soccer field. Kailey Kolesar scored two brilliant goals early in the first half to put the Gryphons up by 2 goals. The Santa Clarita team posted their own goal late in the first half but the Gryphons girls seemed to have the win assured with their dominant offensive midfield play from Kailey Kolesar, Giselle Cardenas, Kate Backhaus, Angelina Farias and Bethany Sierra.

But at halftime that momentum switched as the winds picked up and the Gryphons girls faced a heavy wind directly into their face. The Santa Clarita goalie was punting the ball from her own goal all the way to the goal box of the Gryphons which really gave the Gryphons girls fits. Santa Clarita went up 3-2 with less than 10 minutes left in the game. Then Giselle Cardenas pressed the ball down the left side and sent a screaming cross to the back post in which Hannah Tyree came out of nowhere to finish the ball in the back of the net to tie the game.

In the last minute of injury time the ball settled to Riley Jelleschitz’s feet on the back defensive line and she sent a forward pass over a pressing Santa Clarita defense in which Hannah Tyree ran on a first touch chipped a charging Santa Clarita goalie. On the ensuing kick off the whistle blew and the Gryphons won 4-3.

The Gryphons Girls 2004 team played a second game on Sunday in Santa Maria against an undefeated Outkast soccer club team. Like on Saturday the wind played the most important part of the game with the OutKast club getting the howling wind at their backs the first half. They used that in the first half to keep the ball pinned on the Gryphons' defensive side and ended up scoring three goals. But the second half was the exact opposite with the Gryphons getting chance after chance at goal. Taitlyn Kingsbury scored two goals for the Gryphons with assists from Giselle Cardenas and Bethany Sierra. The Gryphons girls had multiple chances to tie the game up but the Outkast keeper made two excellent diving saves. The Outkast got a last-minute consolation goal. The game finished 4-2 for a Gryphons loss.

The Gryphons Boys 2012 team played a PSG Academy team and unfortunately, lost 4-0. The Gryphons Boys played their best half of the season the first half going into a 25 mph headwind and holding the other team to 0-0 at the half. Silas Dobrenen, Nathan Brown, Troy Masei and the rest of the defense was rock solid in the first half. The second half things just got away from the Gryphons.

Coach Jeremy Cookson said, “We had a few great chances but it just wasn’t our day. The other team was skilled and able to punish our mistakes, but we were right there in the game and battling the whole time.”