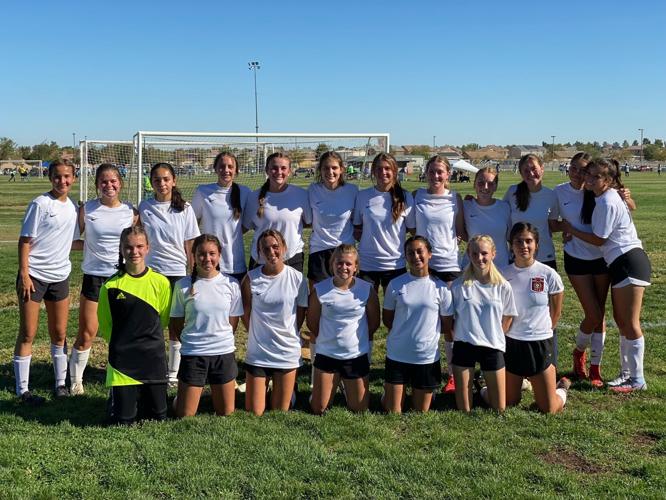 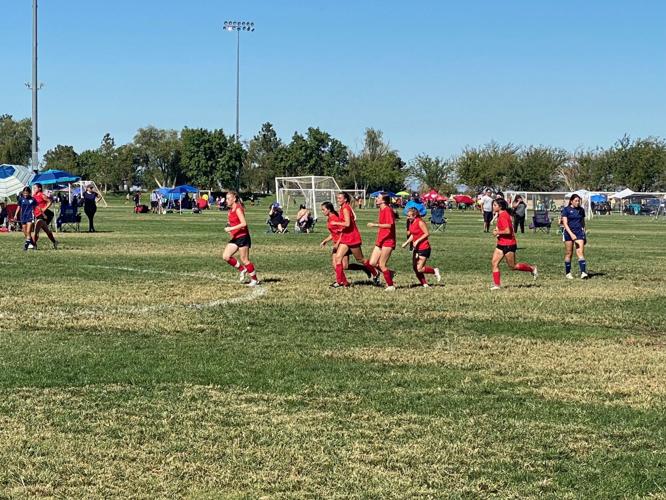 The 2004 Gryphons Girls team running back to the center line after celebrating Kailey Kolesar’s goal in the first half. 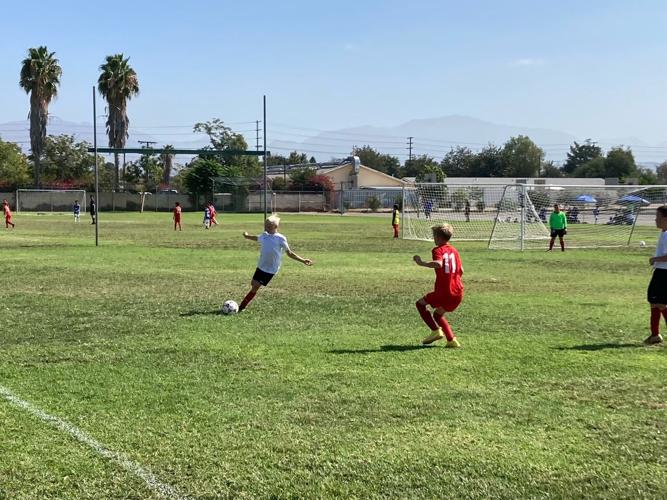 Silas Dobrenen in the white jersey holds the defense together.

The 2004 Gryphons Girls team running back to the center line after celebrating Kailey Kolesar’s goal in the first half.

Silas Dobrenen in the white jersey holds the defense together.

The Tehachapi Gryphons 2004 Girls team traveled to Lancaster on Saturday to face Lancaster Lightning club team on their home turf. The Gryphons girls came out firing.

In the first five minutes, the Gryphons were awarded a corner kick. Taitlyn Kingsbury called out the corner kick play and crossed a beautiful ball to an on rushing Kate Backhaus, who cracked the ball out of the into the back of the net. Two horrible refereeing calls gave the Lightning two penalty kicks in which they scored. The half finished 2-1 Lightning.

Coach Joshua Tyree commented after the game to the Gryphons 2004 girls: “Sometimes in soccer the best team just doesn’t win. You out-possessed them, you out-ran them, and you out-shot them. You were by far the better team today.”

On Sunday, the Gryphons 2004 Girls had another game in Lancaster facing a North Valley team from Moorpark. The Gryphons girls dominated this game, winning 4-1. Kingsbury had two goals in the game with Hannah Tyree assisting her on both her goals. Kolesar added to her totals with a blazing goal from 30 yards out. Tyree capped off the game with a free kick over and around the defensive wall that fell under the other team's diving goalie. Madilyn Schneider had another standout game as she is really starting to shine in her newfound position on the field. Carlee Hensler played the full 90 minutes with a defensive midfield effort that really shined. Marissa Grier had a diving save to her left on a penalty kick, which kept the North Valley team from getting a second goal.

“Our passing was phenomenal! If we keep building this momentum we’re going to take teams by surprise as we face them again," Cookson said.

The Gryphons 2012 Boys continue to build and learn when playing really tough competition. Coach Jeremy Cookson said: “The boys played better than the score indicated, with the other team doing a better job capitalizing on opportunities in the back from our mistakes." The Gryphons 2012 Boys lost their game 6-1. Troy Masei continues to shine on field and is developing as a really good defender.