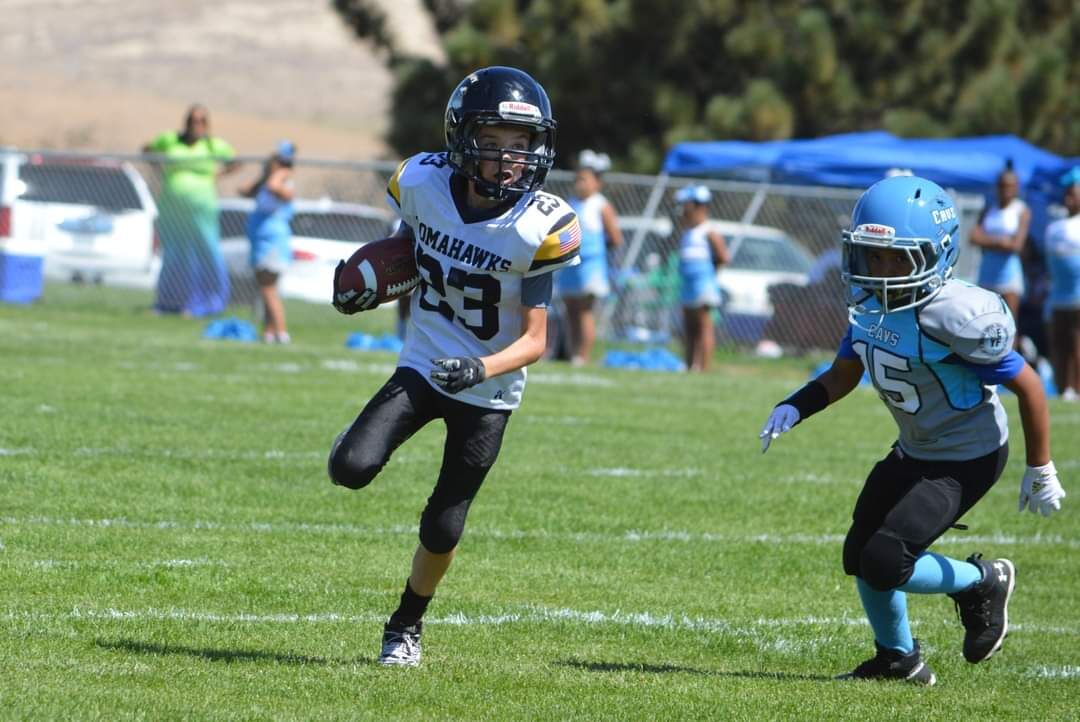 In his last appearance as a Tomahawk, No. 23, David Sipes, scored three Tehachapi touchdowns Saturday. 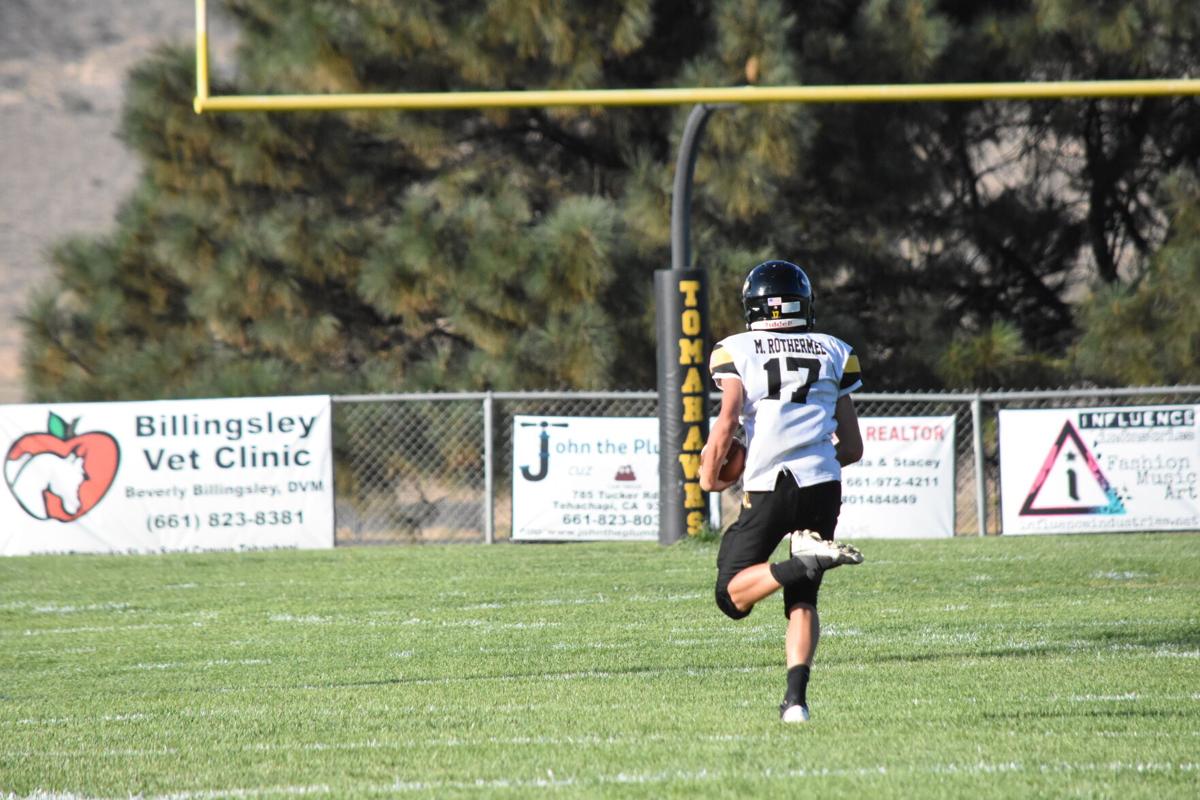 No. 17, Mason Rothermel, ran in the Tomahawks' first defensive touchdown of the season. 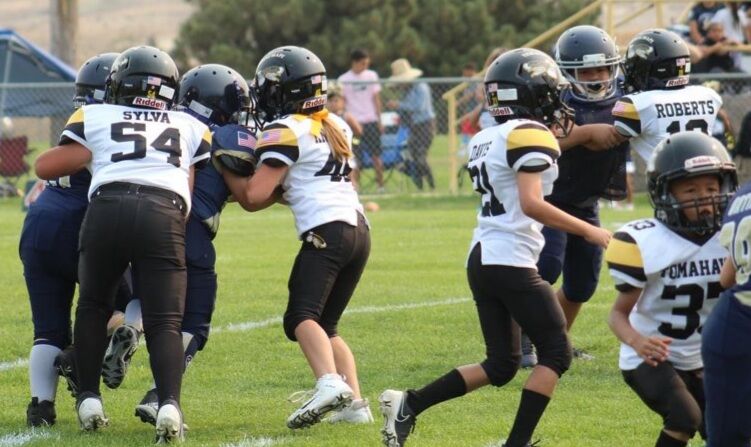 Defensive players No. 54, Eli Sylva, and No. 46, Kenley Knowles, sack the Commanders quarterback. 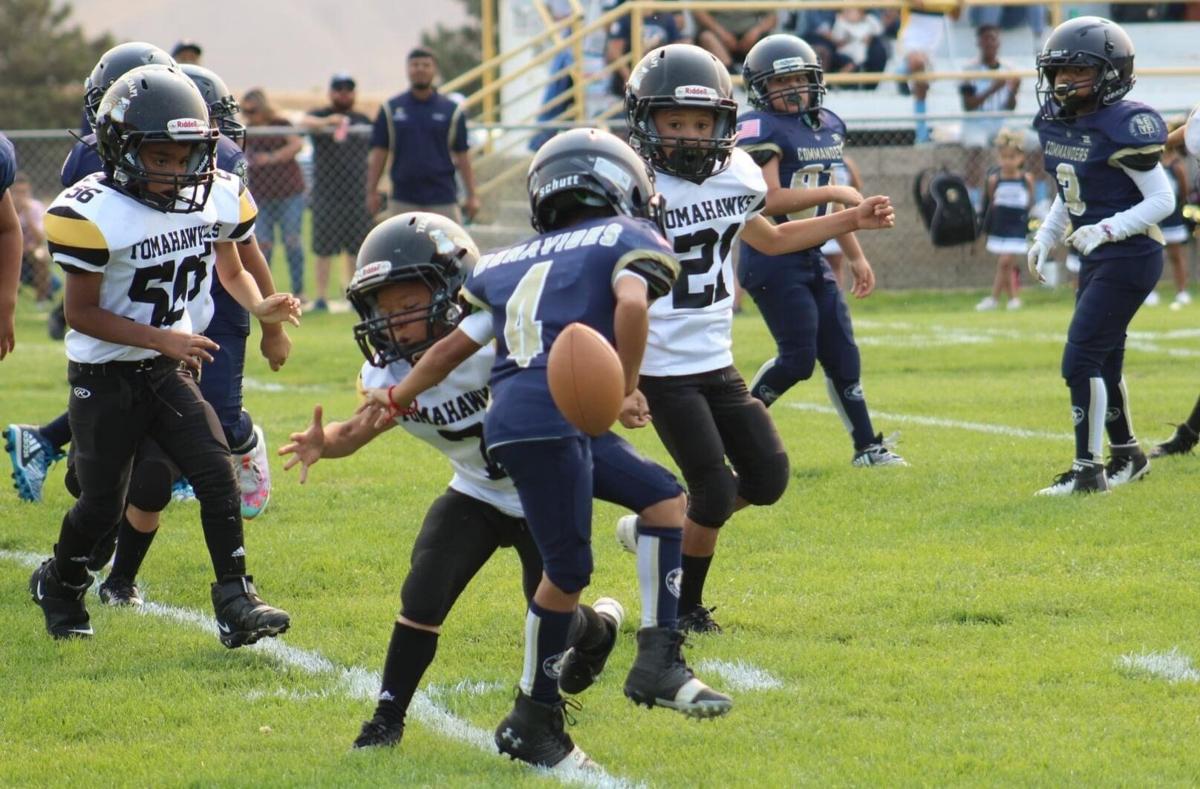 A big hit by the Tomahawks' No. 7, Marcus Coates, causes a fumble. 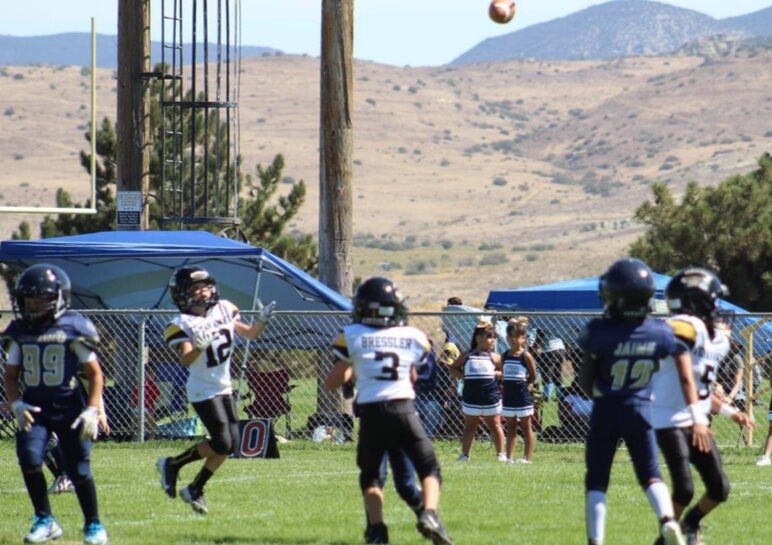 In his last appearance as a Tomahawk, No. 23, David Sipes, scored three Tehachapi touchdowns Saturday.

No. 17, Mason Rothermel, ran in the Tomahawks' first defensive touchdown of the season.

Defensive players No. 54, Eli Sylva, and No. 46, Kenley Knowles, sack the Commanders quarterback.

A big hit by the Tomahawks' No. 7, Marcus Coates, causes a fumble.

Tehachapi Tomahawks rallied Saturday to put on an incredible show for family and fans. Through the combination of mighty defense and talented offense, each Tehachapi team sent its opponent home scoreless.

Kicking off the day's chain of events, 3-0 freshman Tomahawks defeated the Commanders of Shafter in a shattering, 44-0 win.

Sophomore Tomahawks also rose to the challenge, facing the Cavaliers of Bakersfield. Tehachapi’s strong defense, paired with an impressive offense led by No. 23, David Sipes, who scored three Tehachapi touchdowns, the Tomahawks shut out the Cavaliers, 30-0.

“The boys had a good game,” head coach Chris Bowman said. “David Sipes scored in his last game as a Tomahawk. I want to thank him for his dedication and efforts these past years and wish him luck.”

Within the junior varsity, a new energy emerged in the Tomahawks' encounter with the Cavaliers.

Coming up on a big play seconds before the half, an interception by No. 22, Vandon Villanueva, interrupted the Cavaliers' drive. The Tomahawks capitalized on the turnover with a 60-yard touchdown from No. 14, Julian Navarro.

The Tomahawks shut down the Cavaliers in a huge, 26-0 victory led by No. 1, Caiden Ferguson; No. 34, Austin Rolow; No. 60, Richard Cuellar; and No. 75, Brody Nylander; and outstanding efforts by No. 6, Teaghan Paige, for three second-half Tehachapi touchdowns.

“It was a great win for this hardworking team,” Head Coach Brandon Billings said. "All the coaches couldn’t be prouder."

Varsity Tomahawks took to field and set the tempo early in their duel against the Cavaliers.

“Our offense improved from the previous week, scoring two touchdowns, while the defense did not allow them to score,” said Head Coach Rod Michael.

Defensive player No. 17, Mason Rothermel, scored the first defensive touchdown of the season when he deflected the pitch on a toss play, scooping up the ball and returning it for the score.

In a clean sweep, the varsity Tomahawks finished 20 points to the Cavaliers' 0.

“We played good today and the boys are excited to get back to work and prepare for next weeks challenge,” Michael added.

As special guests for the day, the Tomahawks welcomed intended varsity athletes of 2020 back to the field. Some of these young athletes dedicated five seasons to playing as a Tomahawk. The unfortunate circumstances of COVID-19 and the pandemic stripped them them of an opportunity for a final season, and so it was an honor to have them present.

Many thanks are also due the Scott sisters — Sierra, Summer, and Sheridan — for their delightful performances of the National Anthem throughout the day.