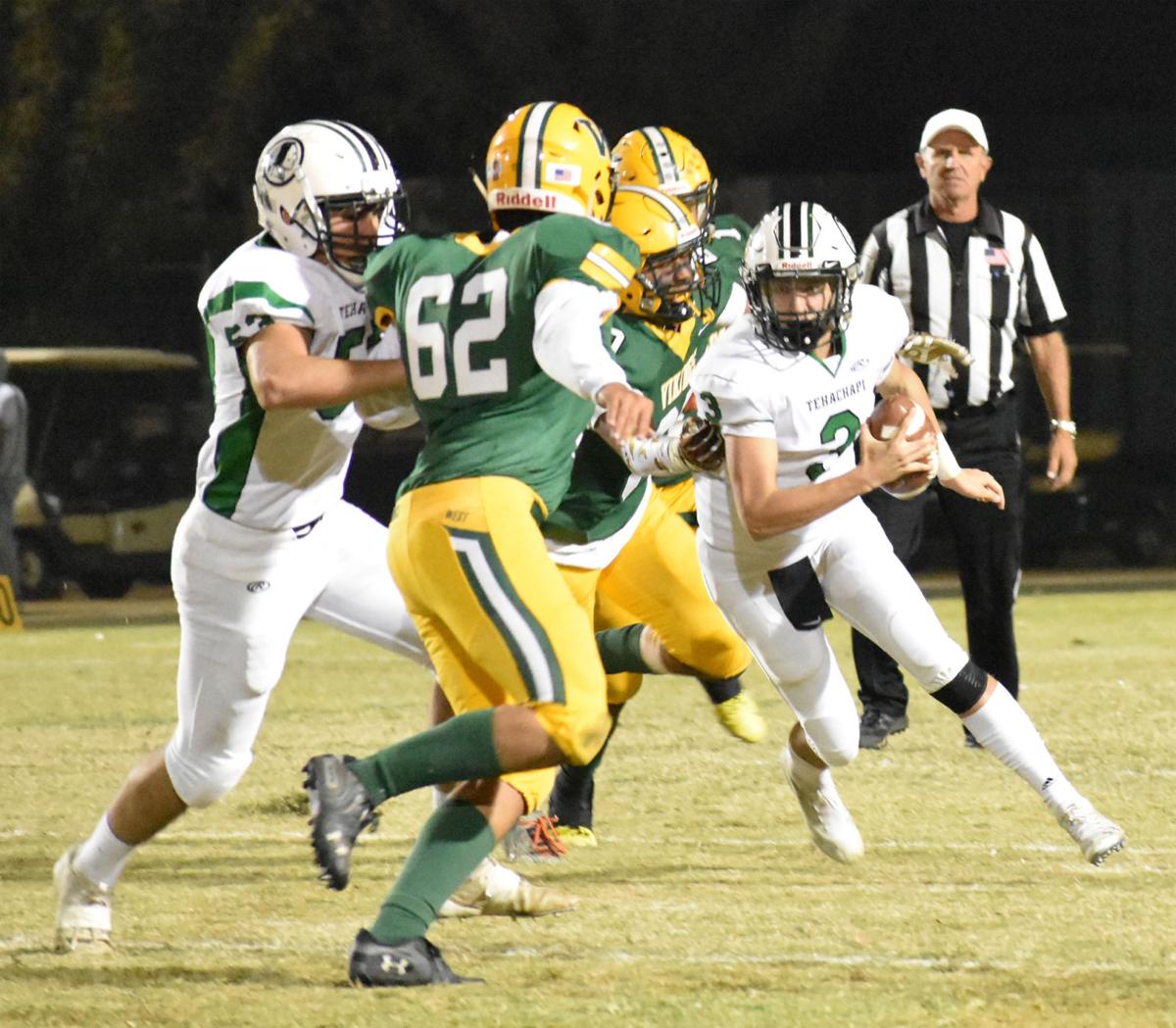 Warrior Jake Tye, right, takes a quarterback keeper past the line of scrimmage in football action against West. Cooper Mello, left, provides blocking on the play in 2019. This season, the Central Section is mapping out a December start date for football practice with a varsity kickoff on Jan. 8. 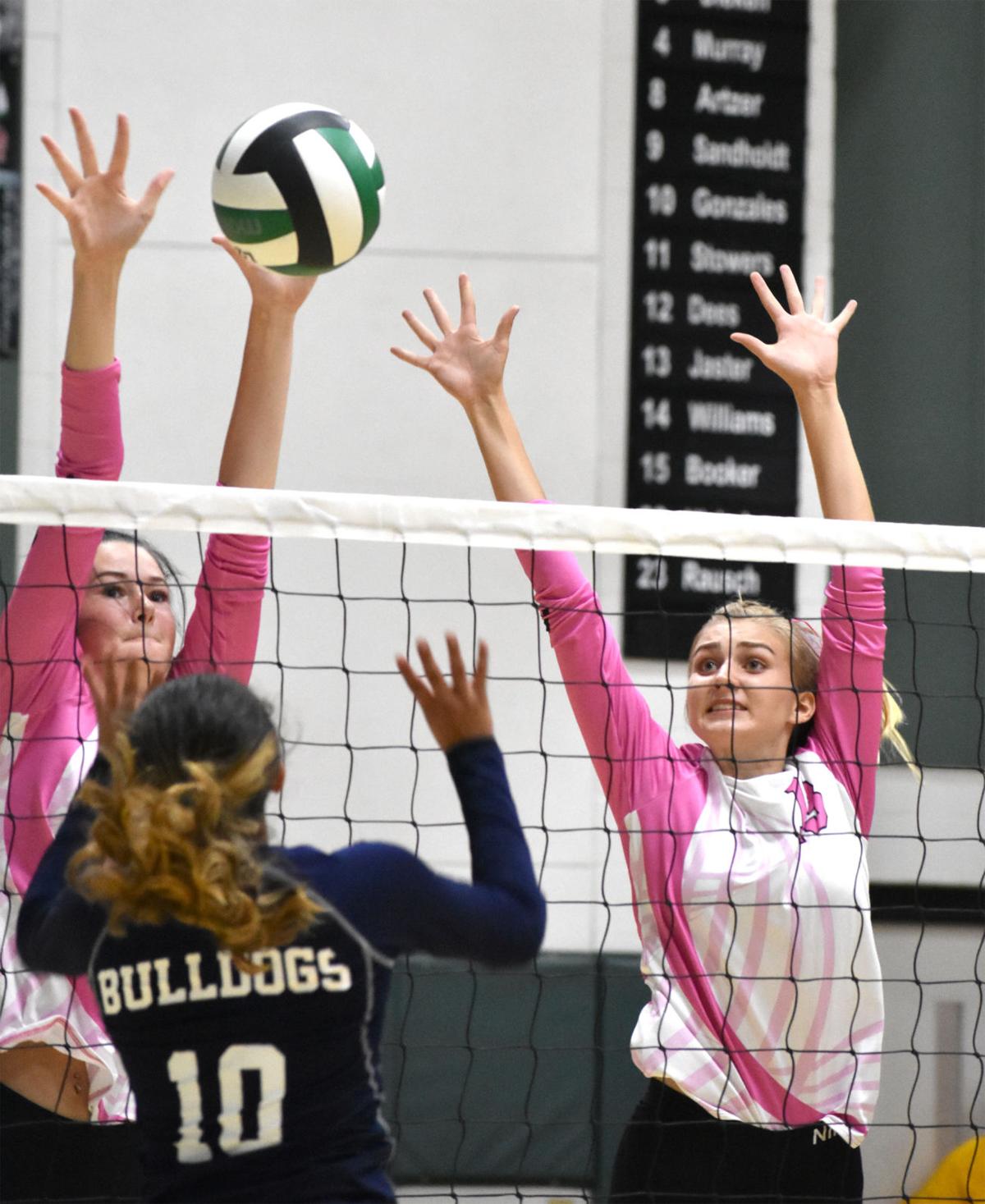 Aubrey Murray, left, and Abbie Jaster, right, combine to block a Golden Valley put away attempt in October 2019 in SYL action. The Lady Warriors swept the Bulldogs in the match, 3-0. The 2020-21 season will be delayed by the Central Section because of ongoing concerns about coronavirus.

Warrior Jake Tye, right, takes a quarterback keeper past the line of scrimmage in football action against West. Cooper Mello, left, provides blocking on the play in 2019. This season, the Central Section is mapping out a December start date for football practice with a varsity kickoff on Jan. 8.

Aubrey Murray, left, and Abbie Jaster, right, combine to block a Golden Valley put away attempt in October 2019 in SYL action. The Lady Warriors swept the Bulldogs in the match, 3-0. The 2020-21 season will be delayed by the Central Section because of ongoing concerns about coronavirus.

The California Interscholastic Federation made a much-anticipated announcement Monday that high school athletics in California would take a back seat until at least December, pausing a decades-long tradition of certain annual fall competitions, football most notably, amid the continuation of COVID-19.

The announcement means come January the CIF may have teams back on the field competing, all depending on the various moving goalposts of COVID-19. Who knows what the metric will be then, meaning first we were told to flatten the curve, which we did, then once life started to return to normal caseloads of the disease became the latest measuring stick. When I participate in an activity, I like to know where the goal is at, not constantly be told the rules have changed. This, ladies and gentlemen, is the world amid COVID-19, but kudos to the CIF for attempting a solution.

And yes, before you ask, I am putting a high value on athletics, because I have witnessed firsthand, at many levels, from youth sports to the NCAA, the impact and motivation that athletics provides some students. Contrary to the utopian fantasy subscribed to by some, not every student walking the halls is a future Rhodes Scholar. Their athletic ability or just sheer enjoyment of competition is the only reason they pay any attention in school.

For them and many others, the lessons learned on the fields and courts will carry with them far longer than any distance-learning class they will fight through in 2020 while trying to suppress many other demons along the way. Of course, I want them to do so safely so you can stop writing the “shame on you email,” but it is time to find a proper balance between school, coronavirus and athletics.

Despite my shared frustration with many others, I will focus on the positive, and that is there will be an attempt at some sort of a season this coming school year. After the CIF’s statewide announcement, the Central Section, in which Tehachapi is a member, released its schedule details, mapping out a December start date for football practice with a varsity kickoff on Jan. 8. Games will continue through mid-March with section and state playoffs into April. At least at this point there is an attempt at a full season with 10 regular season games between league and non-league contests. Volleyball follows a similar path.

Basketball moves to the spring, with practices starting in March and games continuing through late May. Baseball will start in late March with competitions through early June; soccer will start in early March and continue into early May. Essentially, three seasons of sports have been combined into two, meaning some athletes will have to make choices as to what sport they would like to play. I know for Tehachapi this is an issue with the baseball/basketball/softball; we’ll see what roads are selected by these athletes.

Part of me is excited to be a part of history. I’m not ringing this thing up to being a done deal until the season kicks off because of the aforementioned moving target that is COVID-19, but should the Tehachapi Warriors football season kick off in January, it will be the first time that has ever happened. A few years ago, I was a part of the earliest start to a football season (Aug. 17), so why not be a part of the latest (and oddest) start of a season as well?

There are also the elements to deal with; the average high in January in Tehachapi is 51 degrees, the average low is 31, and we know with evening games how that wind chill plays a part in lowering that number dramatically. Soccer players up here have been dealing with it forever, but then again they aren’t required to use their hands much. I’m not thinking a passing game will be very useful anywhere in the Central Section this season, especially in places like Tehachapi where pigskin hardens to the consistency of a rock at temps below freezing.

While far from ideal, this will be interesting and hopefully historic for good reasons. More to come as we discuss the impact of these decisions in the coming months. It is not perfect, but what is in our new world? I’ll take a thought-out, imperfect plan over reckless discourse any day. Whatever helps our kids compete and salvage some semblance of a normal high school experience during the height of abnormality is a win in my book.

This latest CIF proposal attempts at creating a balance, taking into consideration public health and mental health factors for our young people. That, personal feelings aside, is something we should all be able to support beginning in January and beyond.