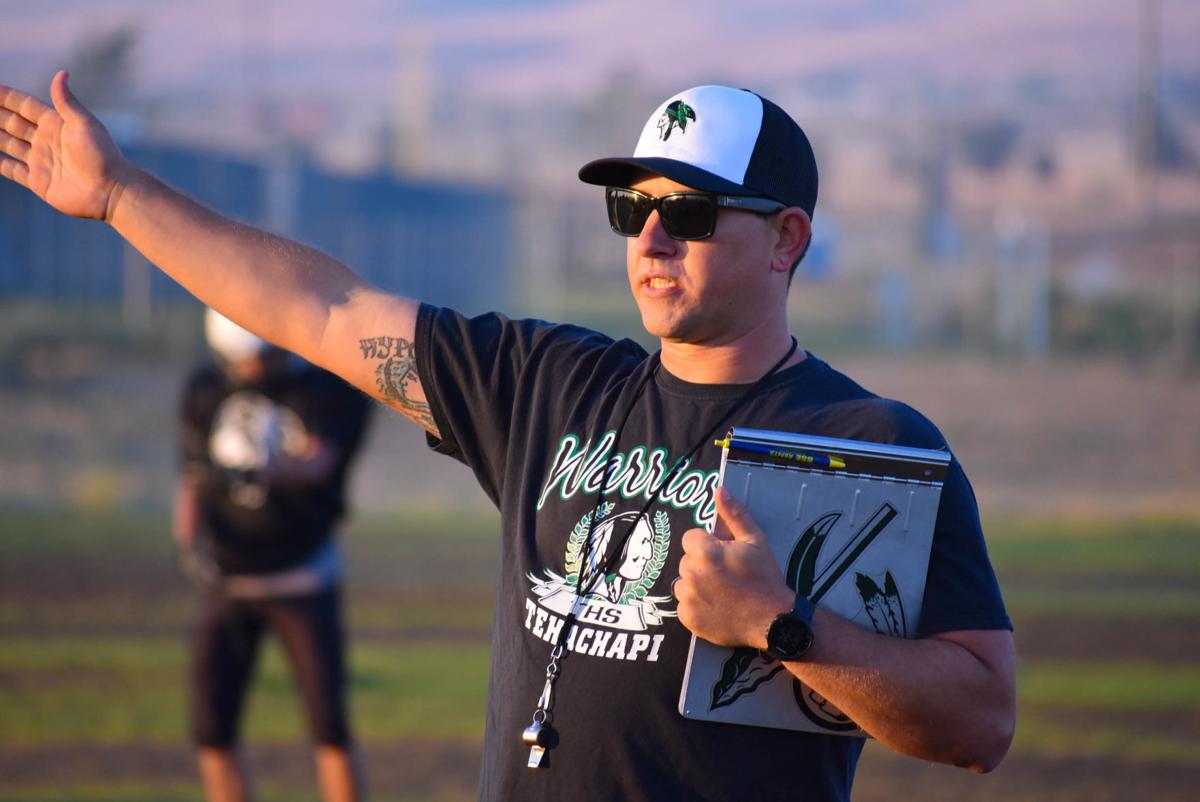 Warriors Coach Doug DeGeer provides direction to his players in this 2018 photo.

Warriors Coach Doug DeGeer provides direction to his players in this 2018 photo.

There is no mistaking the fact that the future of sports in 2020 is one in limbo in the midst of COVID-19. Doug DeGeer, head football coach of the Tehachapi Warriors, is working through the odd process of preparing for the fall season, without much guidance on what that looks like.

DeGeer and his fellow coaches across the state are working through this pandemic with their sights on the uncertain future. There has not been any indication about what the next several months might hold for prep sports, and football specifically. However, the athletic directors in the South Yosemite League are working on plans should the season be delayed a week, several weeks or even to the point of potentially playing just the league schedule. But those plans are preliminary.

“There are some people somewhere working up a plan depending on how everything goes,” DeGeer said Friday during a Zoom interview posted to the Tehachapi Warriors Football Facebook page. “We’re planning like there is going to be a season, we’re hoping that it is going to start on time, and we’re going to get to play our whole schedule and we understand that might be delays or it might be something where we play a smaller number of games.”

In the meantime, DeGeer has been balancing his duties as a distance-learning-based teacher at Tehachapi High School with his family, home life and the necessity to prepare a team for 2020 remotely. As group gatherings are still not permissible, the Warriors are being remotely guided with technology, playbooks and workout plans being distributed by the coaching staff. With spring practice canceled along with traditional classes, this normal time of preparation has been lost.

The Warriors are also meeting via Zoom so the coaching staff can check in with players, discuss workouts and things they should be doing in preparation for the summer and the upcoming season.

With organized team workouts and access to the THS weight room unavailable at this time, much of the preparation is landing squarely on the players’ shoulders via personal responsibility. It will be painfully obvious come the fall when football does resume the players and teams that made the most of their personal time. Toughness and grit will make the difference.

On the plus side, there is the potential that this pandemic and economic shutdown has resulted in changes to the way the game is played locally. While many teams possess complicated schemes and playbooks, the Warriors are taking this opportunity to simplify their operation. Along with the potential for a drastically reduced timeframe to implement their offense, and mixed results with the attempts at changing the look of the Tehachapi offense the last two seasons, the Warriors are heading back to their roots.

Running the football will be paramount once again, along with much of the Wing-T offense that DeGeer’s predecessor, Steve Denman, used for the final 20 years of his career. A core set of plays and simplicity will prove more valuable for Tehachapi than the athleticism that more complicated teams rely on. But that, of course, is if the games are played, and as state-level politics surrounding COVID-19 continue to destruct the simplest of once-believed inevitable events, we are all left in limbo.

Should we play football come the fall? Absolutely, there is a sense of normalcy that is just necessary for society to function, and around these parts Friday night lights are essential to that. In the meantime, we wait, players prepare, coaches coach remotely and we all hope for the best, understanding that reality still could be a gut punch waiting for us all.